This article covers the best open source tools for sysadmins. 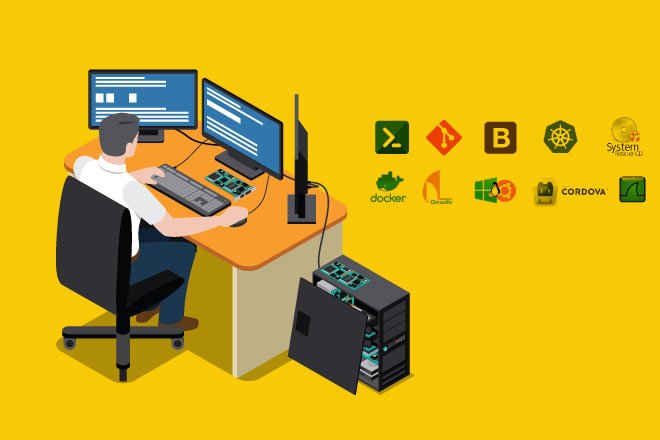 1. PowerShell
Among the tools we will look at, the first is PowerShell from Microsoft. It is a cross-platform task management and automation framework that supports scripting language and command line shell. It is an open source tool for sysadmins based on the .NET framework and works to control and automate Windows, Linux and macOS. PowerShell offers various features for sysadmins, such as Get-Module, remote management, Get-Command, Get-Help, etc. PowerShell was originally designed for Windows and later Microsoft developed it for Linux.

2. Git
Git is a free tool that can handle both small and large projects with high performance. It is an open source control system, which offers flexibility to modify the source code according to user requirements. It has a branching model, which helps each sysadmin to create many locally independent systems. Git has various features such as many workflows, color controls, easier staging areas, GPG signing for tags, etc.

3. Bootstrap
Bootstrap was formerly known as Twitter Blueprint and was developed by Twitter as a framework for the reliability of open source tools. Users can design and develop CSS, JavaScript and HTML applications through Bootstrap. It is an open source framework for sysadmins that you offer for free to users.

4. Kubernetes
Designed and developed by Google, Kubernetes is a powerful system that offers horizontal scaling to sysadmins. They can scale an application using a single command (via the user interface) according to CPU usage. Users can install Kubernetes with any package manager, such as apt-get or yum. It is open source and has different servers called nodes that help configure packet networking. Each of these nodes is contacted by a cluster group from a kubelet. Kubernetes is open source and can transfer data to installations, as well as to hybrid and public cloud infrastructure.

5. SystemRescueCD
This tool is open source for Windows but is a Linux-based package used to troubleshoot Windows and Linux systems. You can download the SystemRescueCD ISO file so that you can use it to create a bootable USB drive. It supports various file systems such as btrfs, xfs, ext2 / ext3 / ext4, vfat, ntfs, reiserfs, nfs and samba. SystemRescueCD offers file editing, boot recovery, and network troubleshooting tools.

6. Docker
Docker is one of the best open source tools for Windows because applications can be deployed and run in virtual containers. There are two different versions of Docker, the Docker Community Edition (DCE) and the Docker Enterprise Edition (DEE). DCE provides tools for building applications and DEE provides multi-architectural functions for various areas of computing. The Docker generally has low cost but great flexibility.

8. Windows Subsystem for Linux (WSL)
It is an open source tool and is a new feature of Windows 10. Developers who create Web applications or work on open source projects can run native Linux command line tools directly on Windows using this tool. The Windows Linux Subsystem (WSL) uses Bash, various Linux command tools, and other Linux tools such as Ruby or Python, so that the toolchain can be used in Windows. Windows users can also run Ubuntu in real time with this tool.

9. Cordova
This tool is open source, free and sponsored by Apache. Cordova is used to develop mobile applications with JS, CSS and HTML. This open source tool also helps a developer to create applications for various platforms such as iOS, Windows, FireOS, Android, LGwebOS etc.

10. Wireshark
This open source package analyzer for Windows is free and used to analyze, troubleshoot network, and develop communication protocols. Wireshark was originally named Ethereal, but was renamed in May 2006 due to commercial issues. It has a version based on the terminal called TShark and was released under the GNU General Public License. Wireshark can run on Linux, Windows, BSD, Solaris and macOS.

ProtonMail Vs. Tutanota: Who is the safest email provider?
Next Post: How to check your iPhone warranty