China landed a spacecraft on the dark side of the moon

Completing 50 years since the man stepped his foot on the Moon, China became the first state to land a spacecraft on the remote side of the Moon.

According to China Global Television Network America, on 2 January, a Chinese spacecraft launched from China in early December and carrying a rover on it, landed in a crater on the Moon side that is always off the Earth. Landing marks a major technological breakthrough for the country and places China on elite space-level countries.

The successful adventure was one of a series of scheduled missions, codenamed Chang'e-4 mission, aimed at exploring the surface of the moon. Prior to this program, China had sent a spacecraft with a rover on the bright side of the Moon, making the third country land softly on its surface.

This effort was not something simple and no one had succeeded so far, because it is difficult to communicate with the robots on the side of the Moon that we can not see. Without direct visual contact with the Earth, there is no simple way to receive radio signals from spacecraft on the dark side of the moon. And to put it bluntly, things are not dark, since the sun sees them, it is simply not visible from Earth. So the term "solitary" is more probable.

China managed to make the communication using a lunar satellite launched in May, and acts as a mediator between the spacecraft and the Earth.

The landing on the Moon was made on a crater in the south pole called Aitken. It is an area of ​​lunar surface that many scientists want to explore. The crater, which is about 1.550 miles wide, is considered to be a very old crater, created when a huge rock hit the Moon billions of years ago. Assessing the exact age of the basin created by the collision could help us learn more about when this incident occurred, providing clues about how the environment of the Solar System was.

Chang'e-4 may not be able to estimate the exact age of the South Pole-Aitken basin, but it is equipped with many scientific instruments that will tell us more about this mysterious part of the Moon. The spacecraft will soon develop its rover, which will learn more about the composition and structure of the rocks in this area. For now, it will focus on the sky, gathering data on astronomers here on Earth who are willing to take advantage of the spacecraft's unique position on the far side of the Moon. At night, when the Moon protects this region from both the Sun and radio signals from Earth, the spacecraft should have an incomparable view of the stars.

See a relevant video below 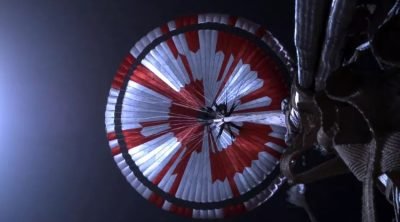 Hidden message on the parachute of the new NASA rover