We read from her site:

The Cybercrime Prosecution Directorate informs the citizens - internet users, for an attempt of financial fraud, through emails with extortionate content

In recent days, there have been many cases of internationally known fraud through sexual blackmail "sextortion scam", which manifests itself in the mass sending of e-mails to various recipients, regardless of gender and age, with the aim of deceiving them.

In particular, unknown perpetrators, using fraudulent e-mail accounts, send bulk messages to recipients and inform them that they have access to their device and the message has been sent from their personal account.

At the same time, they are informed that malware has allegedly been installed, after their visit to a website, which has activated the camera and has recorded them in personal moments.

It is further reported that the malware has collected all the contacts of the users, from the social media and the perpetrators threaten to send the material in question to their contacts, in case they do not receive bitcoins.

It is noted that these extortionate emails mainly have the following formats and content, while the reference to real codes is made to convince users of the real threat.

The Cybercrime Prosecution Directorate recommends to the recipients of these fraudulent messages:

ignore the messages and do not deposit money in the accounts listed by the perpetrator,
do not open any attachments in emails from unknown senders,
never communicate with the blackmailers for any reason,
immediately change any security code (password) they think is at stake, and
evaluate their computer security settings.
It is reminded that citizens can contact the Cybercrime Prosecution Directorate, anonymously or anonymously, in order to provide information or to report illegal or reprehensible acts or activities carried out via the Internet, at the following contact details: 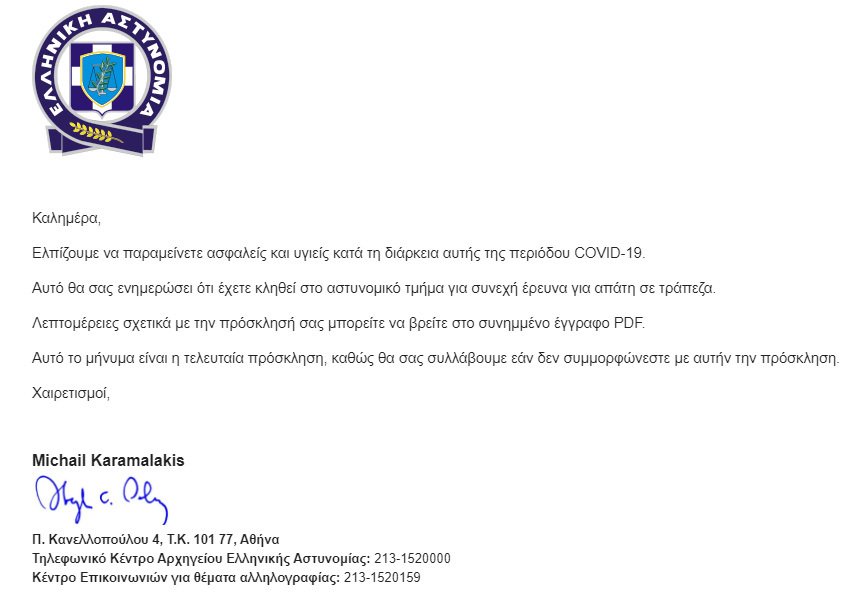 Malicious email with a fake sender to the Greek Police

Can the police recover the files you have deleted?