The CIA will use a new Dark Web site to collect anonymous information.
The Secret Intelligence Service has set up a .onion web site on the Dark Web: "Our onion site is one of the many ways you can contact the CIA."

Today the CIA announced in a press release the release of the new page that parabolic named "Latest Layer".

According to the service, moving to the Tor network (known for its anonymous services) was a natural move, as the site is "secure, anonymous, and one can provide information without leaving a trace".

The new page is an exact copy of its regular website, CIA.gov, and includes sections like the CIA World Factbook and an electronic library of declassified documents.

CIA Public Affairs Director Brittany Bramell said in a news release that the move to Tor reflects the agency's interest in keeping up with the modern internet habits. The service also gives instructions on how to download the Tor browser to connect to the site.

“Our onion site is one of the many ways you can contact the CIA. For more details, see the Info tab on either our site or our onion site. ”
Tor Project, created and operated by Tor's browser, says it is not surprising and does not disagree with the CIA's software.

“We believe that onion services are a key next step in securing the web, similar to setting up https. So it's no surprise that the CIA wanted to take advantage of the privacy and security services provided by onion management, ”said Stephanie Whited, public relations director for the Tor Project on Motherboard.

On the other hand, it is known that intelligence services are against any encryption, and if there are demanding backdoors. For example, former CIA director John Brennan publicly stated that he was against encryption and secure communications because they are an obstacle to the fight against terrorism.

But let us not forget his statements Edward Snowden who said that the purpose of secret services is to make better public relations.

For example, on the https://www.cia.gov/kids-page page where the CIA is trying to approach children to secure the next generation of spies. 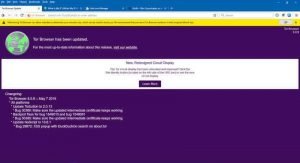