Let us here again for another fascinating journey into the world secrets and encryption! As we have seen there has been interest in articles dedicating to Alan Turing, on the occasion of the eponymous movie. Based on your interest and the initiative of both me and iGuru, we will travel (to what else?) Between secrets, mysteries, codes and ways to decipher them through the centuries!

Also, the most fanatical readers, ie those who will be more excited and dedicate a little of their time, will be able to participate in a game and the first five will earn licenses (one license each) for an antivirus program. The game; You will find out later. :)

Let's start our tour now! As you all know and inform every day now, in the modern world everything around us is encrypted. For every call on our mobile, for every cable TV channel we watch, for every cash withdrawal from an ATM, we rely on sophisticated electronic encryption to block access to indistinguishable ears and eyes.

This need for "secrecy", however, is not a phenomenon of our time, for 2.000 years codes and cryptocurrencies have played a key role in politics, military operations, assassinations and the fight against crime. Secret messages determine the outcome of wars, build or dismantle empires, rescue or condemn people.

The success of cryptanalysts is determined by their motivation. Nothing fascinates a person more than secrets and for some cryptographers "revelation" is the only motivation. There are also other motives, patriotism, revenge, greed or the desire for knowledge.

The disclosure of codes and encryption requires constant interest. Although today it is easy to break the ancient cryptographic method used by Julius Caesar, at that time his opponents showed endless persistence until they understood the alphabetical transposition and discovered his secrets

The codes that were created and then broken, determined the course of history. The secret and its revelation capture imagination and explain the regular appearance of decryptors in television and cinematic films.

The world of cryptography does not look like the world of everyday life, it is even more strange than the scenario of the most appealing thriller.

4.000 years ago, the ancient Egyptian scribes carved on the walls of great monuments their religious rites or events of their daily lives. For some strange reason, some elements changed, altering the meaning of the "hieroglyphic" history they engraved.

Their purpose was not to conceal the meaning; instead, they wanted to surprise or entertain the reader, or potentially increase the mystery and magic of religious texts.

Instigated by this practice, they pre-dated the real encryption developed in the next millennium.

Caesar was the most famous leading figure of ancient Rome. He was famous for his courage, his insightful intelligence and his tendency to risk everything. In his military memoirs (Galactic Wars), Caesar describes his skill in "hiding" the content of a message, so that it seems incomprehensible in the hands of the enemy.

When the Roman legions attacked the military forces of today's France, Belgium and Switzerland, the officer of Caesar Cicero was besieged and somewhat absent from capture. Caesar wanted to inform him (without the enemy knowing) that help would come soon. He sent him a message in Latin using Greek characters (something like our known greeklish).

The Secret of Polybius

Polybius placed the letters of the alphabet on a 5 × 5 board and put numbers from 1 to 5 in each column and in each row.

By the time Suetonius was writing about Julius Caesar, the secrets of his cryptocurrencies were already known. Anyone who wants to decrypt his letters and read them, Suetonius wrote, "must replace the fourth letter of the alphabet, that is, D with A and so on."

This type of cryptographic substituting letters is known as the transitive cryptogram of Caesar. For example, if we want to write Caesar's favorite statement "I came, I saw, I livedUsing its cryptography, the result would be "CYCLIS, THEMIS, IMSNC".

The Combination of Polybius and Caesar

What will happen now if we try to place Caesar's transposition on a board?

We will see with an example! Someone wants to send the message "the ship will sail the dawn in the east".

The first thing we do is put the letters in a table as follows. 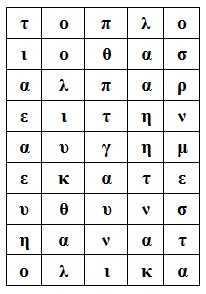 As we said at the beginning, the article will contain a challenge game. The game will have to do with the combination of the above examples with some small differences that participants will need to understand in order to solve the puzzle! The solution to the puzzle requires an understanding of what was mentioned above and a little imagination! :)

The coded proposal is as follows:

The first five who will send us by e-mail (at georgios.koliou [at] iguru.gr) the solution of the encrypted proposal, will win a license for an antivirus program.

*** A little help for those who are involved. The letters of the encrypted proposal are 72, so try to find what table they will get. The multiplication of which numbers makes us 72? So x * y table. After that, you need to understand how many positions we have moved the alphabet as in the example of Caesar's transfer.

Google and Johnson & Johnson together to develop surgical robots