In October of 2011, Mike Dobson and David Gilday created the CubeStormer II a Lego robot that runs on the Samsung Galaxy S2 processor. The robot broke the world record in making a Rubik's cube in 5.27 seconds. At that time he just defeated the best human time, signaling the first time a robot manages. 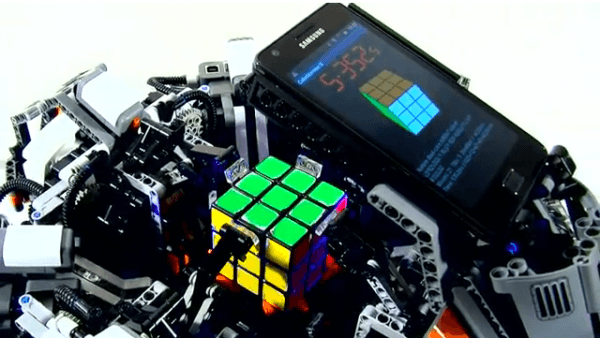 The two manufacturers created a new robot. At the Big Bang Fair last weekend in Birmingham, UK, the team presented its next creation: CubeStormer III. Its mechanical and robotic parts were again made by Lego but this time it was using one Samsung Galaxy S4. The new robot managed to break the CubeStormer II record as he managed to make Rubik's cube in just 3,253 seconds.

The smartphone acts as the robot's brain. It uses a custom application that uses the camera to "see" the cube and colors, then sends commands to eight Lego Mindstorm EV3 bricks, which use the robot's arms to spin the cube.
See the amazing video