home / News / What are teletypes and why were they used with computers?

What are teletypes and why were they used with computers?

For several decades, people who wanted to communicate with each other used devices called teletypes, which were essentially an electromechanical typewriter with output on paper spools. 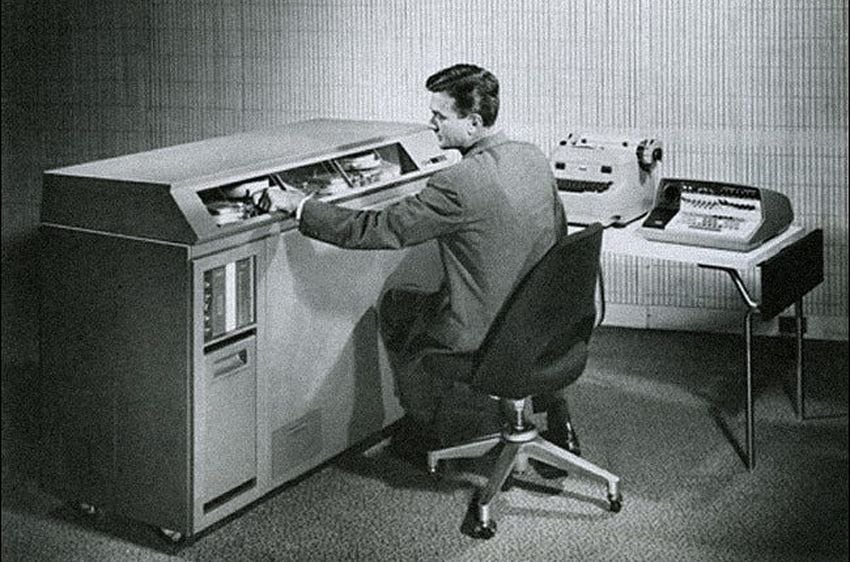 What is Teletype?
A teletype (teletype writerOr teleprinterOr teletype ή TTY) is a telephone communication device that allows operators to send and receive text messages using the typewriter keypad and printed paper as output.

To understand the basic principle behind teletypes, imagine two electric typewriters connected by wires (or a wireless radio link). Whatever you type on one typewriter is automatically printed on the other. Now imagine that these two typewriters can be miles apart, thanks to wired networks or radio transmissions. You may be aware of what a communication revolution these machines represented in the early 20th century.

The output of a teletype was a roll of paper cut by the operator, depending on the size of the message,

The primitive teletypes were the teleprinters. They first appeared in the 1840s and provided an advantage over Morse code telegraphs that the output of a telex was readable by humans without the need for special training.

A system of two teleprinters, with one operator trained to use a keyboard, replaced two trained operators Morse code and the news could be sent directly to the whole world.

In the early 1900s, these original telexes became more reliable and easier to use, replacing their original piano keyboard with the well-known QWERTY keyboard and the ability to record messages on tape for repeated transmission.

And of course the ancestors of teletypes were the telegraphs, which were machines that sent messages with Morse signals by interrupting or letting current flow through a power source. Their output was a long thin ribbon of paper, on which the stamps of the Morse code were engraved.

Why did people use computer telescopes?
Until the advent of screens, people on early computers used the telephone as a means of writing and receiving messages and results to and from the computer.

To imagine why a teletype would be useful with a computer in the 1920s, remember these two remotely connected typewriters from the last example and replace one with an interactive computer system. Instead of communicating with a remote telex, you send and receive human-readable text to and from a computer.

The computer could be in the same room, in another part of a building, or even in the middle of the world, as long as it is connected via a telephone network.

Many great big computer systems (especially those sold by IBM) operated without interaction, in standard batch mode, which meant that a single program would be typed in punching cards, the punch cards and the individual program would wait their turn along with other users' programs.

Along with batch mode computers in the mid-1950s, engineers began experimenting with interactive mode, where a computer operator could provide data and get results in almost real time. in a kind of interactive "conversation" with the machine. Many of these computers like Bendix G-15 (1956) and IBM 610 (1954) used modified electric typewriters as input or output devices, which were not necessarily commercial teletypes.

An example of this process is the IBM 610 (1954) pictured below, an early interactive computer that used a modified typewriter to print output results.

His invention timesharing 1959 allowed many users to share an interactive computer system at the same time, making low-cost, individual terminals, such as teletypes, desirable for computer use. As this practice became more common in the 1960s, organizations with servers (mainframe) began to buy more and more teletype machines for use as terminals.

Teletype Model 33
One of the biggest reasons the term "teletype" was so closely associated with computing was Teletype Corporation Model 33 (also called "ASR 33"), which was first released in 1963. Unlike most other teletypes of that time, the Model 33 could understand ASCII standard, which the American National Institute of Standards had recently developed as standard code for electronic devices and computers. ASCII as a standard adopted by all which allowed many different computer brands to easily communicate with each other. 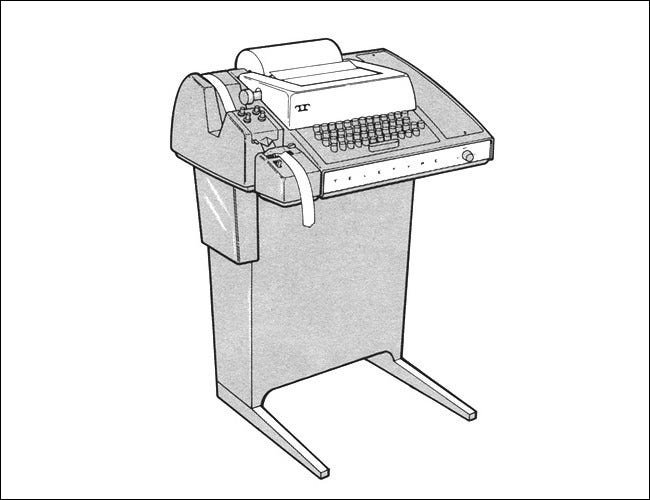 Popular microcomputers in the late 1960s and early 70s, such as PDP-8The PDP-11 and Data General Nova, supported ASCII coding, making the Model 33 an ideal low-cost input / output terminal for them. In particular, the DEC PDP series were influential cameras and if you look at their historical photos, you will almost always see a Teletype 33 model used next to them.

When you used a telegram with a host like this, you saw your own local paper input as you typed, and then received a response from the computer that printed below your text, as the teletype prints on a continuous roll of paper. which is stored inside the unit.

In 1970, Dennis Ritchie and Ken Thompson developed the UNIX operating system on a PDP-11 using the Teletypes Model 33 teletype. The terms "TTY" on Linux, the Terminal application on Mac and even, to some extent, the command line in Windows 10, all share the same lineage with linear text output (line-by-line) derived from computers by telex.

The age of video games 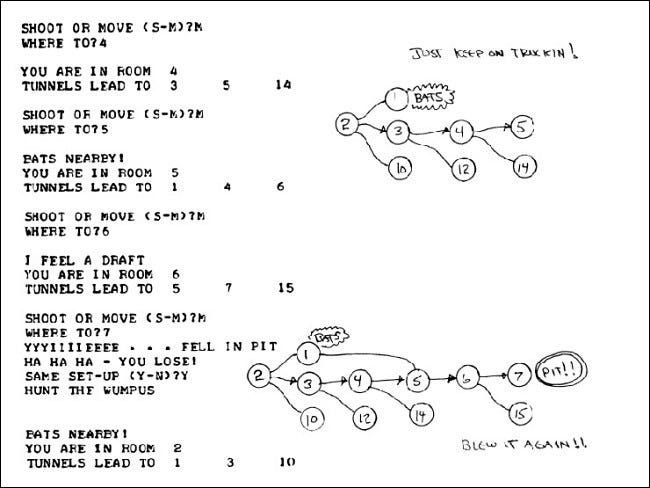 It is worth noting that the age of television produced a number classic games, text only, which have long continued to influence the video and computer game industries. Notable examples include Zork, Lunar Lander, Hunt the Wumpus, Star Trek and The Oregon Trail. All of these were originally played as text-only games with typed messages and output printed on paper.

Why did people stop using telescopes with computers?
Although they have been popular for some time, teletypes have had some major drawbacks as computer terminals. It was very noisy due to the mechanical action of the impact head, which hit the paper. They were also slow, often limited to about 10 characters per second. And lastly, you had to use a lot of paper.

In the 1960s, companies like IBM began experimenting with computer terminals that used CRT monitors instead of paper for output. These early "glass telescopes" sought to provide greater interaction speeds and save money on paper consumption.

While at least three manufacturers produced keyboard terminal monitors by 1970, each cost significantly more than a Teletype 33. In 1974, Hewlett-Packard sold a branded version of the groundbreaking terminal display. Datapoint 3300 called HP2600A for $ 4.250. At the same time, a Teletype Model 33 cost about $ 755 to $ 1.220 depending on its capabilities, representing significant savings.

But the price of keyboard terminals dropped dramatically in the 1970s, having slipped to about $ 800 per unit by 1980 (depending on its capacity). Around that time, the well-respected DEC VT-100 terminal was usually sold for about $ 1.550. 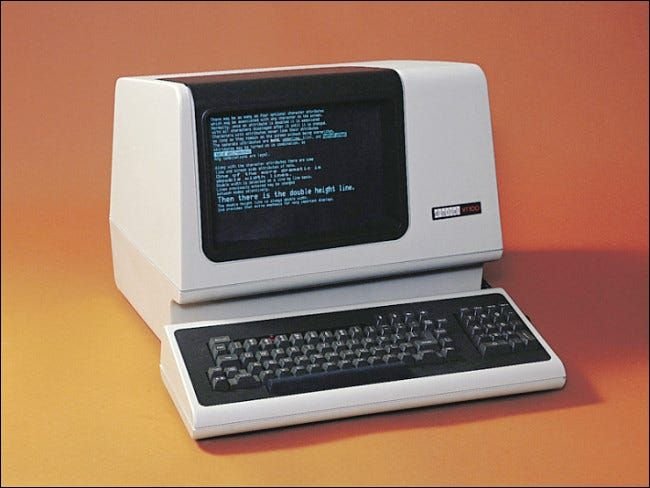 As soon as the price of keyboard terminals dropped and they exceeded the capabilities of telex, telexes quickly fell into obscurity. Compared to teletypes, the terminal screens were quiet and had no moving parts other than the keyboard, making them more reliable and enjoyable to use. Their display speed was also not limited to the mechanical action of a printhead and so they could display more information much faster than a teletype could.

Also in the mid-1970s, personal computers such as the Apple II or the Z began to integrate the input and output function directly into the computer itself. In the case of the Apple II, owners could use a safety screen or a standard TV (with RF modulator) as a projector, making any kind of external terminal - teletype or anything else unnecessary.

So the next time you sit down at your computer with a high-speed, high-resolution screen that is completely silent and exudes power, be thankful that you do not have to read iGuRu through a 10-character print machine. But on the other hand, some might find it amusing.