Searching the internet for a good option to detect malware, such as trojans for example, we "fell" on Emsisoft Anti-Malware.

We were impressed by the tests he carried out av-comparatives.org the unknown so far in our Emsisoft Anti-Malware occupies the top positions.

We decided to investigate it further. We downloaded the application and installed it into a complete, up-to-date Windows 8 system.
The installation was game, and it ended in 2 minutes although the installer was big enough (182 MB). After downloading all of our updates, we asked to choose the type of scan, fast, smart, complete or custom. We chose a quick scan to start.
[quote] Note: The program was installed on a computer that already had another anti-virus installed, but also another Anti-Malware to compare the processes but also to see if they work together and do not fall on top of each other. Although we do not recommend it to you, all the applications worked perfectly. [/ Quote] The image below shows the low system requirements of Emsisoft. While scanning the computer we were testing, the system CPU did not exceed 30% while the memory used by the program was only 1.4MB. Just below is the anti-virus which needed 3MB and 101.7MB at the same time while it was idle. 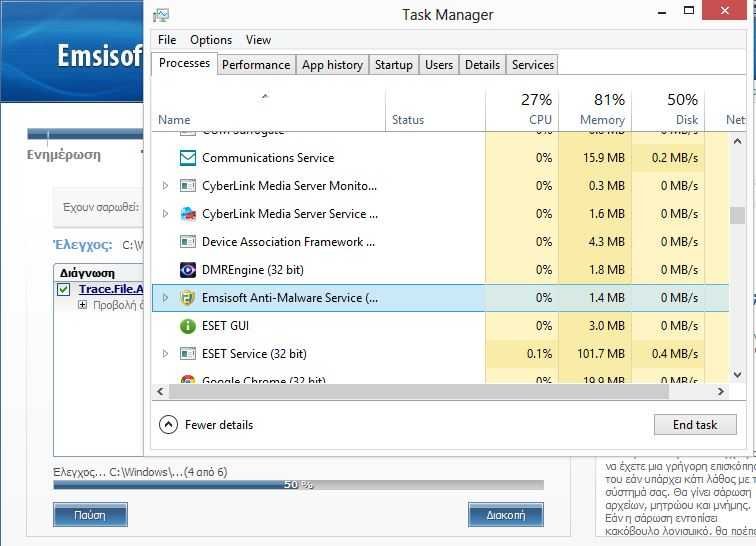 The binomial scanner of the application appeared to be very fast and we were surprised to find out how light it was during the scan. The results showed that it is lighter than products using a core.
The database used for the scan contains 99.298 malware samples. It's exactly the same as used by Bitdefender Total Security 2013.
We've visited several phishing sites and Emsisoft Anti-Malware has shown us that it can provide protection. Once it detects the malicious Web site, Anti-Malware immediately prevents the upload and gives us a warning. With Internet Explorer, Chrome, and Firefox, we were unable to access the phishing websites we chose.

The program is designed to be easy to use (installing in Greek greatly helps in later management of the application). Emsisoft Anti-Malware as we mentioned earlier uses Bitdefender's crawler. Prior to 7.0, he was using Ikarus, but he replaced it because of his tendency to pose false positives for programs that were harmless.

What is he doing

Removes them Trojans that include backdoors, keyloggers, dialers, spyware, adware, tracking cookies, worms, viruses and viruses rootkits from your computer.

Malware detection rate is a pretty strong point of application. Also the minimum system resource consumption that runs the program makes it one of the best of its kind.

Its price makes it very affordable since the license fee for one year is in 20 euros. Together with all the above, we noticed with joy that software developers, have a forum for support and in Greek please!

Without excessive design, and with a very high level of reliability in scans, Emsisoft Anti-Malware unveils the target of its development team: Focus on security rather than on showcase.

See the screen shots of the tests 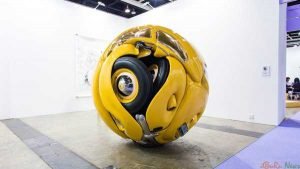