Microsoft brings to Windows 10 a new easy-to-use hard disk analysis tool. So far it is in the preview and is expected soon in the stable version. 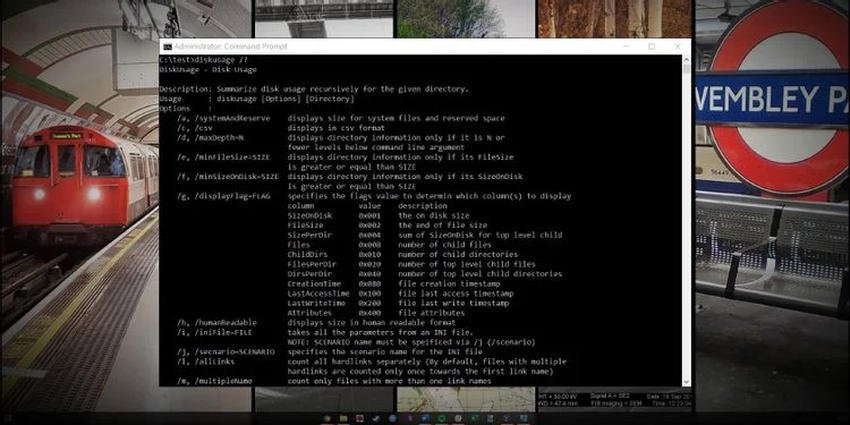 What better way to release a handy new feature than to not tell anyone about it and wait for someone to figure it out? Well, that approach seems to work for Microsoft, which has quietly introduced a new disk analysis tool in the latest versions of Insider Preview.

Using a disk allows you to control how much space your drives take up using the command line. There are other useful parameters for analysis.

What is the new Windows 10 Disk Utility?
Although Microsoft has not announced the new disk usage tool, Windows 10 Insider Preview users have found the new feature. It is called Disk Usage (disk usage) and is a command line tool that analyzes your disk space. Perform as discussion from the Command Prompt and comes with an extensive set of options and parameters to help you properly scan and manage your disk space.

The tool is currently being developed. If you are using Windows 10 Insider Preview build 20277 or 21277 (or later), you should be able to use diskusage on a single drive.

While the tool is still in development, some features may not be used accurately. In addition, there are some usability issues. For example, the tool currently requires you to search for file sizes using bytes instead of megabytes or gigabytes.

This results in somewhat complex search strings involving huge numbers. If you want to search for files larger than 1,73 gigabytes, you must enter 1.857.573.355,52 bytes.

For now, you should use an electronic unit converter to make sure you are entering the correct data values. Nothing bad will happen if you do not, but you may not find the files or folders you are looking for.

When disk usage is fully operational, you will be able to create specific configuration files that contain the search and analysis options you use regularly, saving extra time when analyzing your data.

Why is it exciting to use the new Windows 10 discs?
Before using the disk in Windows 10 Insider Preview build, Windows 10 users had to use tools such as WinDirStat or TreeSize or Total Commander to scan an entire drive and record the folders that use the most space .

The introduction of Disk Usage is ideal for those who like to use the command line and feel comfortable with its functions.

How to use diskusage in Windows 10
If you are using one of the correct versions of Windows 10 Insider Preview (version 20277 or 21277 or later), you can try using the disc yourself.

The command opens the "Disk Usage" command line utility and displays an extensive list of parameters and usage options.

Alternatively for those who are not in the Insider program
For those who do not run any of the Insiders programs, Microsoft has brought this feature as a stand alone. That is, you can download the corresponding exe file from the mom company and try it. Let's see how. You will see that the command lags behind switches and settings with that of Insiders, but you can still have a good idea of ​​what is coming in the near future.

Microsoft: 2021 the end of passwords
Next Post: Google's winter suggestions for virtual walks