The greatest space observation in Earth's history is underway in the last 24 hour due to the coming of a huge comet running at 377 kilometers a second to the sun. The ISON comet, which is estimated to be up to 4,8 (as long as a small mountain), does not pose a threat to the Earth but is expected to offer thanks to the splendor of a shocking spectacle and the opportunity for the scientific community to collect important data and information about nature and the reaping of these celestial bodies.
On November 28, the comet from the exotic Cloud Cloud, tens of trillions of kilometers away, will approach the sun at a distance of 1.159.000 kilometers, and its temperature will automatically explode at 2.760 degrees Celsius. If he survives that close passage from the sun, then ISON will outshine the 1680 Big Comet in splendor. 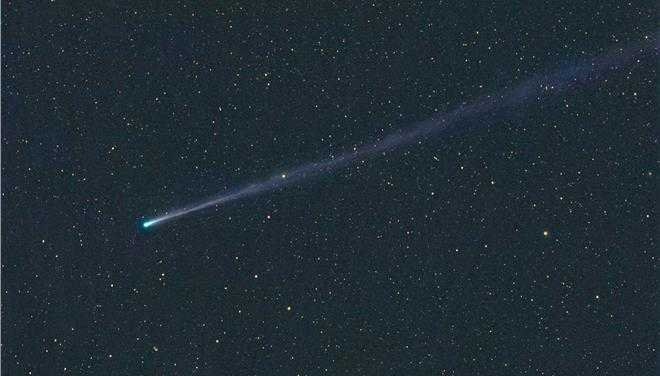 In November of this year, an incredibly brilliant comet discovered by the German astronomer Gödfred Kirch with a telescope passed almost as close to the sun as ISON is expected to do, fearing the world that was running in the churches seeking ... forgiveness from God.
The Great Comet was visible and the day while the tail that left behind was appreciated much later that 150 was the milestone.
ISON was discovered in September of 2012 by Russian amateur astronomers when it was at a distance of 940 millions of kilometers from the sun. It was then 25.000 times fainter than today and its detection was incredibly difficult even with large telescopes.
But at the beginning of June, the telescopes were "arrested" for good when it was at a distance of 500 millions of kilometers. Carbon dioxide along with the dust released from its surface had already created a 300.000 queue.

The latest 24, space telescopes such as Hubble, SOHO A and B, or SDO, as well as large Earth observation devices, are turning to the ISON comet, following its rapid approach to the sun.
Even if the comet dissipates from the heat of the sun, the spectacle that it causes is expected to be shocking, while the information that telescopes will collect for this distant visitor will be most valuable.
"No matter what the comet's fate is, we are in the midst of an exciting opportunity," said Matthew Nate, an astronomer at the Lowell Observatory in Arizona.
"We are dealing with a celestial object that enters the Earth's trajectory after 4,5 billions of years in the cold. All eyes will be on it. "
Some time ago, a NASA-funded study conducted by Lowell Observatory and the Southwestern Research Institute in Texas, estimated that the comet is very likely to survive from its near-pass to the sun.
If this happens, then at 26 December, the comet will be at the nearest point of its path to the Earth and will depart from our planet 45 millions of kilometers, that is 1 / 3 of the distance that separates Earth from the sun.
Already from the beginning of December in the northern hemisphere, the comet will be particularly brilliant and visible with great ease with the naked eye. Even the day will be visible low on the horizon of one towards the end of the month and in early January will be seen throughout the night.
At present the comet is visible with a powerful pair of binoculars or amateur telescope as long as the night is clear and away from the lights of big cities. The comet can be better observed one hour before sunrise.

IBM: work for free with the first quantum computers

His relationship with the Big Comet of 1680

ISON is perhaps the lost brother of the Big Come of 1680 speculate NASA scientists. The similarities of the two bodies are many and astronomers speculate that they are two parts of a large comet that was broken down millions of years ago. Due to the gravitational interactions and the time passed, one comet visited our innermost solar system before 333 for years and now the second one is followed by a slightly different orbit.
The Big Comet was estimated to have passed 0,42 astronomical units away from the Sun (one astronomical unit is the Earth-Sun distance), and at just the same distance ISON will pass.
In some calculations, if ISON survives, it may explode forever away from our solar system and never return.
It weighs over 3 trillions of kilos
The size of a small mountain seems to be the comet as its diameter, according to the latest calculations by NASA's JPL, does not exceed 4,8 kilometers. Its weight is predicted to range from 3,2 billion pounds to 3,2 trillion pounds. As all comets are a "dirty snowball" consisting of frozen dust and gasses, water, ammonia, methane, carbon dioxide. These are fundamental constituents that, prior to 4,5, billions of years ago they were also aggregated to create the planets of our solar system. Scientists speculate that it comes from the Cloud's cloud that stretches for up to a year of light away from the sun and is a scattered area of ​​comets and comet-like objects.

Taking a walk in the park a T-Rex

The "wreck" of the colorful iPhone 5c