This is a follow-up to an article published on 9 January 2014. The title of “OTE watches you after their surrender.“The follow-up as you know is about another Greek Internet provider. Let's talk about Wind. 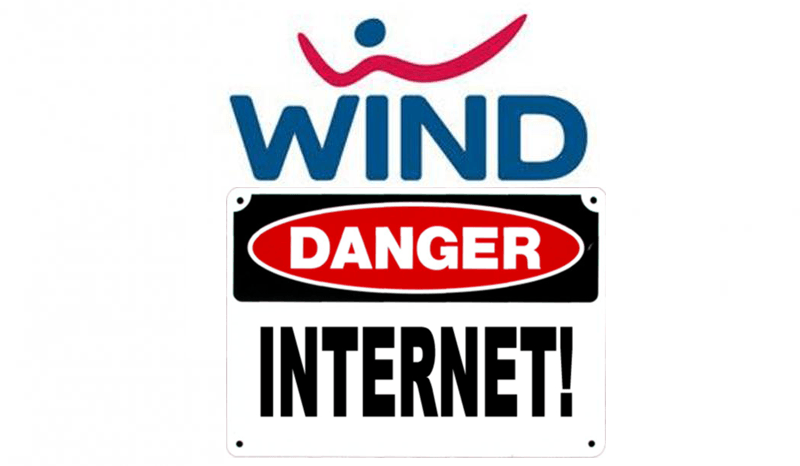 Immediately after my decision to give up the only wired network provider in Greece, I contacted the company that promised me a connection to 24Mb with 14 euro (price only for Internet with a mobile phone package).

After waiting about 10 days, a message on my cellphone informed me that today (07 / 1 / 2014) I am connected to Wind. Really back in the afternoon I added my username and password and logged in to my new 24. Of course let's not say that "24ara" was 10ara, because we know that they happen depending on the distance of the house from OTE's distribution center.

Everything was wonderful for an hour. Then the bees came, sorry for the disconnections ... I accepted it relatively calmly. I tried to justify the company thinking that it is a new connection and has not yet stabilized. From 7 / 01 / 2014 I started contacting the customer service center and the fault department. I have to admit that they are polite, but no work.

At first the employees tried to politely tell me that I was irrelevant and I would probably have made a mistake in the connection. To prove to them that I was not wrong, I mentioned to them that I was using my old router, and that nothing had changed. Then, they tell me there will be damage to your hardware. (By the way, the Wind store that I made the connection to gave me a router that was used and did not work. But let's not charge that to Wind).

Yara Birkeland: The first autonomous ship will sail next year

Well guys no harm, the line is. “We have to check all the possibilities, sir. We will send you a technician to check and make measurements, but if it is your fault you will be charged a visit. ”

Wow !! I realized that I got involved… ..on one more time.The technician came 3 days after the specific phone, did his checks and found that it was the line! I was satisfied for a while, not that he made it but at least I felt justified.

Disconnections in the meantime continued (along with phones in the fault center) After some time the company decided to report the fault elsewhere? to OTE for line control. Not to be outdone, one check followed each other but I didn't have a stable and reliable Internet. So a month passed ... And the first account comes. They are incredible and they have a lot of courage I thought and invited them to announce that I signed a contract that only obliges me to pay when they provide me with a reliable service.

The answer was that I would have to pay activation fees and that they would remove the days when the connection was not fixed. I give way to anger and wait. After a day I get a message on my cellphone informing me that I was cut off 15 euro… The pressure is up again, the phone again and another confrontation ..

The situation was going on like this, and of course the disconnections continued. One Tuesday informed me that a technician will come back for another check (this time they did not tell me they would charge me if you owe me to my fault)

Google After I / O Extended Heraklion 2017

If you are one of those people who's considered your online presence to be very important, you can probably understand the feeling. On Wednesday, since no technician had informed me that he would pass by the company's phone on Tuesday morning, I decided that I had enough patience with that "company."

After a month and a half, I called Forthnet and asked them to get the number from Wind. Immediately after, the phones started ringing. Offers and the known. I explained the situation to them, told them that I did not want such offers and that it was too late now. Of course on these phones one of the customer service center boldly told me that I can not leave if I do not pay the bill that along with the deactivation fees had reached 120 euros.

The next move was a complaint to EETT.

At the moment I'm awaiting developments, and of course I can not know what will happen. For one thing I'm sure. I will not pay for a service I did not have, and when I had it I was not sure whether I would have it the next hour.

So beware of the pitfalls

YG: the service with the new Forthnet company was activated on 28.02 of 2014 and since then there has not been a single disconnection, at a speed that 14-15 Mb has. I should mention that I did not change the router or anything else in connectivity.

Europol: Wi-Fi hotspots are not safe

Microsoft has removed the download links of Windows 8.1 Update 1