Hashcat is the most popular password cracker and is designed to crack even the most complex password.

Passwords are mainly protected with hash keys, such as MD5, SHA, WHIRLPOOL, RipeMD, NTMLv1, NTMLv2 and so on. They are also defined as a one-way function and it is a mathematical function that is easy to perform, but it is very difficult to reverse.

Hashcat converts readable data into a corrupted state. Dashes do not allow anyone to decrypt data with a specific key, as standard encryption protocols do. Hashcat uses dictionaries, rainbow tables, and even careful approaches to find an effective and efficient way to crack passwords.

How to break hashes

The simplest way to crack a hash password (ie a hashed password) is to first try to guess the password. Each attempt should be fragmented and then compared to the actual hash value to see if it is the same, but this process can take a long time.

Attacks with ready-made password dictionaries and brute force are the most common ways of guessing passwords. These techniques use a file that contains words, phrases, shared passwords, and other strings that may have been used as your password.

It should be noted that there is no guaranteed way to prevent dictionary attacks or brute-force attacks.

Other approaches used to crack passwords:

You can download Hashcat here. . Can be used at Kali Linux and is pre-installed on the system. It has the following features:

A small lab setting on how to crack a password is shown in the next section. A dictionary attack will be simulated for a set of MD5 hashes that were originally created and saved to a file. The list of "rockyou" words found in Kali Linux was used.

How to crack a password through a dictionary attack

1. Create a dictionary with MBD5 hashes

To start this demo, we will create many hash code entries.

In detail, they will then be exported to a file called "target_hashes.txt". Each command must be executed in the terminal, as shown below:

The choice -n removes the new line added at the end of the "Password". This is important as we do not want new line characters to be fragmented with our password. The "tr –d '-'" section removes any characters that are blank or hyphenated from the output.

To do this, we need to type the following command line in the terminal:

This is also illustrated in the table below:

Hashcat can be started on the Kali console with the following command line: hashcat -h.

This is shown in the following screenshot:

Some of the most important options of hashcat are -m (the hashtype) and -a (attack mode). In general, we should use both options in most attempts to crack a password.

Hashcat also has specific rules for use in a wordlist file. The character list can be customized to crack passwords.

Finally, Hashcat provides many options for password fragmentation that can be broken. This is shown in the image below: 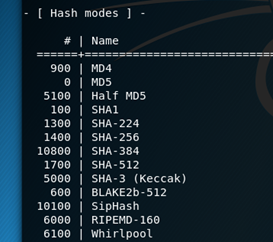 Kali Linux has many built-in word lists. To find them, use the following command line:

This is shown in the image below: 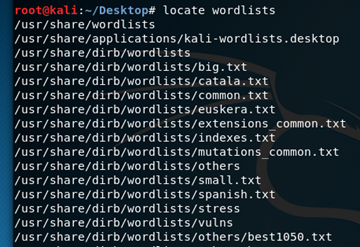 The "rockyou" word list is now in use, as shown below:

In the final step, we can begin to we break the hashes contained in the file target_hashes.txt . We will use the following command line:

These passwords are weak and do not take much effort or time to crack. It is important to note that the simpler the password, the easier it will be to detect.

In addition, there are some GUIs that make hashcat easy to use. Hashview is one of these projects. It is a tool for security professionals to help organize and automate repetitive password-breaking projects. It is a web application that manages Hashcat commands. 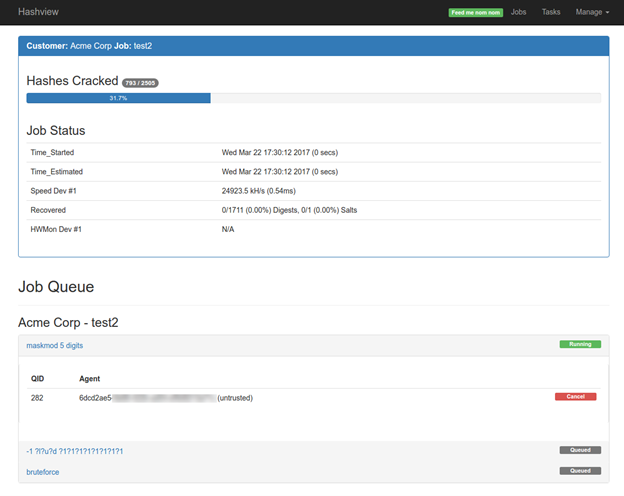