For the past 37 years, Microsoft has used a variety of logos to represent its flagship product, Microsoft Windows. Let us remember its whole history and the evolution of its brand over the years. 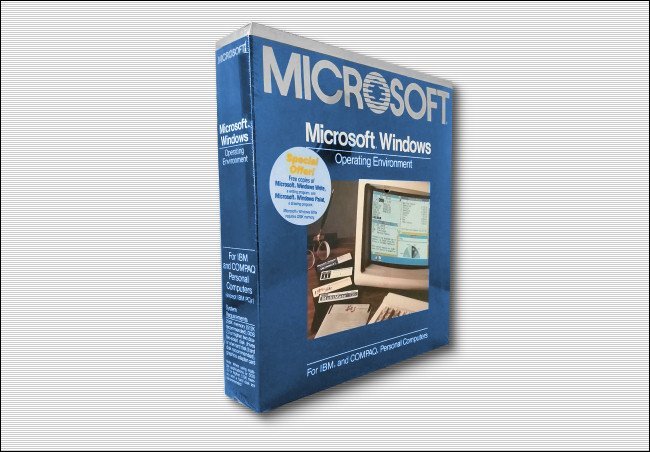 Before embarking on our journey into the past, it is important to note that while researching, we discovered dozens of small variations of the Windows logo used in prints, advertisements, software, retail boxes, and more. There are too many to cover in detail in this article.

Just for convenience, we will group some of the main shapes and themes that Microsoft has used as a Windows logo over time.

In the beginning, Windows did not have a shaky logo. The packaging box, boot screens, and ads for Windows 1.0 (1985) and 2.0 (1987) typically used a Microsoft Windows word mark in a special font without a special icon next to it.

But in recent years, Microsoft has unveiled a rarely used Windows 1.x and 2.x logo of the era, with an asymmetrical four-frame design (which you can see above) indicating different window sizes that filled the screen but did not overlap.

In one blog post since 2012, Microsoft 's Sam Moreau referred to this design as "the original Windows logo", but in practice, it was rarely used at the time.

After searching, we found that it was used only with an event of a Microsoft Windows Development Seminar, hosted in 1986 and the 1987, as well as in one Rare copy of Windows in a box distributed at the event. But it was the precursor to the well-known logo that was coming.

"With Windows 3.0, there was no standard Windows logo," said Brad Silverberg, Microsoft's vice president of Windows at the time. "Every marketing team, sales team or sales event did its own thing. "Sometimes someone could be reused, but generally there was no standard."

Some Windows retail boxes also used an early display of a window to indicate compatibility with Windows 3.0.

This is the first appearance that clearly depicts a house window, with four windows placed in a thick outline. It is a design pattern that has been intertwined with Windows, in various forms to date.

Windows 3.1 renewed things for Microsoft in 1992, introducing a brand new logo that borrowed the glass pattern but turned it into a wavy flag that fades behind it.

Former Microsoft vice president Brad Silverberg said of the origins of the famous flag logo: . I asked the marketing team to develop a new one. They used some exterior designers, presented me with the finalists and I chose the now iconic Windows flag. It's still my favorite. He established the colors, the overall design, he has movement, dynamism, and it lasted for decades ".

Microsoft also used this flag logo with Windows NT 3.1, the first version of the NT.

In 1994, Microsoft designers redesigned the wavy logo of the Windows 3.1 era, turning it clockwise at a slight angle, indicating movement and action.

Specifically, with the Me and 2000 logos, Microsoft added a few extra squares to the finish of the window for a fresher look.

With Windows XP in 2001, Microsoft dropped the idea of ​​the flying flag and turned it into four simple colored panels fluttering in the wind.

Similar colors remained on the panels, but the black border disappeared. With Windows Vista (2006), Microsoft gave the plain flag a new center gradient and often placed it in a dark bubble.

Windows 7 (2009) continued the Vista tradition with variants, and Windows Phone 7 (2010) used a pure white version of the plain bubble or square flag.

With Windows 8 (2012), Microsoft completely abandoned its flag-like design and returned to the four windows to look like a house window again, but in a corner.

The bold design of the new logo also deliberately reflected the "Metro" interface of Windows 8, which included application panels (tiles) instead of icons.

However, there are some variations on the exact angles and sizes of the glazing between the different versions.

We get to today with Windows 11, which Microsoft released in 2021. For the Windows 11 logo, Microsoft got rid of the corner and decided to create a simple four-square grid in blue.

In fact, it was inspired by the Microsoft logo first introduced in 2012, which has the same shape but with the four traditional colors of Windows (red, green, blue, yellow).

In a Microsoft promotional video"We looked at the Microsoft logo and made it blue, which is the color that most people associate with Windows," said Windows CEO Vincent Joris.

The new logo reflects the clean new design of Windows 11, while retaining the famous pattern of four-pane windows that has been in use for at least 22 years. Assume that if there is a Windows operating system, there will probably be a window somewhere in the logo.

Twitter: Why Elon Musk wanted so much to take control

HDMI cables: What you need to know