home / News / The most widespread malware for March 2021

The most widespread malware for March 2021

The researchers report that trojan Trickbot has conquered the first place of the index, from the third where it was in January. Researchers report that banking trojan IcedID entered the Index for the first time, occupying the second place, while the established one trojan Dridex was the most common malware during March, up from seventh in February.

IcedID first appeared in 2017 and spread rapidly in March through various spam campaigns, affecting 11% of organizations worldwide. A widespread campaign used a COVID-19 theme to entice new victims to open malicious email attachments. The majority of these attachments are Microsoft Word documents with a malicious macro used to import an IcedID installation software. Once installed, the trojan then attempts to steal account information, payment credentials and other sensitive information from users' computers. IcedID also uses other malware to multiply and has been used as the initial stage of infection in ransomware attacks.

"The IcedID "It has been around for a few years, but recently it has been widely used, showing that cybercriminals continue to adapt their techniques for attacking organisms, using the pandemic as a pretext." Maya Horowitz, Director, Threat Intelligence & Research, Products at Check Point. "" IcedID is a particularly dangerous trojan that uses a range of techniques to steal financial data, so organizations need to ensure that they have strong security systems in place to prevent their networks from being compromised and minimize the risks. "Complete training of all employees is vital, so that they are equipped with the skills needed to detect the types of malicious emails that IcedID and other malware are spreading."

Η CPR also warns that theHTTP Headers Remote Code Execution (CVE-2020-13756) "is the most common vulnerability used, affecting 45% of organizations worldwide, follows the"MVPower DVR Remote Code Execution”Which affects 44% of organizations worldwide. While the "Dasan GPON router Authentication Bypass (CVE-2018-10561) ”is in the third place of the list with the most frequently exploited vulnerabilities, with an impact of 44% worldwide.

The 3 Most Common Malware Threats

The most exploitable vulnerabilities

The 3 Most Common Mobile Malware Threats

The  Hiddad ranks 1st as the most prevalent mobile malware, followed by xHelper and FurBall.

The full list of the most common malware threats in Greece for January is:

Dridex Dridex is a Banking Trojan that targets the Windows platform via spam and Exploit Kits, which relies on WebInjects to monitor and redirect bank credentials to an intruder-controlled server. Dridex communicates with a remote server, sends information about the infected system, and can also download and run additional operating systems for remote control.

Agenttesla - AgentTesla is an advanced RAT (Remote Access Trojan) that extracts passwords and data when typing. Active since 2014, AgentTesla can monitor and collect data from the victim as he or she types, it can also capture screenshots and authentication credentials that have been inserted for many software programs installed on your machine (including Google Chrome, Mozilla Firefox and Microsoft Outlook). AgentTesla sells openly as a legal RAT with customers paying $ 15 - $ 69 for licenses.

IcedID- That's it IcedID is a banking Trojan that first appeared in September 2017. It typically uses other known banking Trojans, including Emotet, Ursnif and Trickbot, to help spread the word. IcedID steals users' financial data both through redirect attacks (installs a local proxy server to redirect users to fake clone sites) and through web injection attacks (introduces a browser process to display fake overlapping content Home).

LokiBot- That's it LokiBot was first detected in February 2016 and is an information spy with versions for both Windows and Android. It collects credentials from various applications, web browsers, e-mail programs, IT management tools such as PuTTY and more. LokiBot is sold in hacking forums and it is believed that its source code was leaked, thus allowing the appearance of numerous variations. As of late 2017, some versions of LokiBot for Android include ransomware functionality in addition to information theft capabilities.

Qbot AKA Qakbot is a banking Trojan that first appeared in 2008, with the aim of stealing bank credentials and data entered by users. It is often distributed via spam email. Qbot uses many anti-VM, anti-debugging and anti-sandbox techniques to block analysis and avoid detection.

Trickbot - Trickbot is a dominant banking trojan that targets Windows platforms and is mainly transmitted via spam or other malware families such as Emotet. Trickbot sends information about the infected system and can also download and execute modules arbitrarily from a wide range of available, such as a VNC module for remote use or an SMB module for distribution within an affected network. Once a machine is infected, the threat agents behind the Trickbot malware use this wide range of modules not only to steal bank credentials from the target computer, but also for lateral movement and recognition within the organization itself, before a targeted attack. ransomware throughout the company.

FormBook - FormBook is an InfoStealer that targets the Windows operating system and was first detected in 2016. It is advertised in hacking forums as a tool that has powerful avoidance techniques and relatively low prices. FormBook collects credentials from various web browsers and screenshots, monitors and records keyboards, and can download and execute files according to C & C instructions given to it.

XMRig - XMRig is an open source CPU mining software used for the Monero cryptocurrency production process and was first released in May 2017.

Joker- The Joker An android Spyware on Google Play, designed to steal SMS messages, contact lists and device information. In addition, the malware secretly subscribes to the victim for premium services on advertising sites.

Vidar– Vidar is an infolstealer that targets Windows operating systems. First detected in late 2018, it is designed to steal passwords, credit card data and other sensitive information from various web browsers and digital wallets. Vidar has been sold on various online forums and a malware dropper has been used to download GandCrab ransomware as its secondary load. 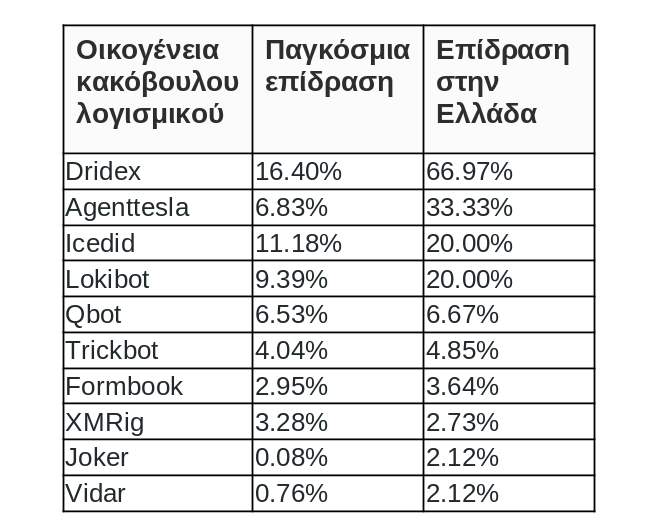 The World Threat Impact List and the Map ThreatCloud of Check Point, based on ThreatCloud intelligence of Check Point, on the largest network cooperation to combat it cybercrime, which provides data on threats and trends in attacks, utilizing a global network of threat detectors. The database ThreatCloud includes over 3 billion websites and 600 million files daily and tracks more than 250 million activities malware every day.