home / News / What is the value of Open Source? The EU preliminary results

What is the value of Open Source? The EU preliminary results

Its first results were presented study on the impact of open source software and open source hardware conducted for the European Commission. The survey found that the increase in the number of code contributions for Open Source projects will lead to an increase of over € 95 billion a year in EU GDP.

The final report will be available in early 2021, but the consortium of Fraunhofer ISI and OpenForum Europe presented preliminary analyzes of Open Source's financial impact in Europe in manifestation "Europe's Digital Decade: Empowered by Open Source" on November 5th. As Manuel Mateo Goyet, Deputy Head of Cloud and Software at the European Commission, points out, Open Source, together with strengthening Europe's cloud computing capacity, can make a significant contribution to increasing competition and innovation in the European Union and this research is an important step towards finding the best way to achieve these goals.

The study found that open source software contributes significantly to the EU economy - A 10% increase in the number of commits (individual changes in a software program) from 2017 to 2018 translated into a 0,4% increase in European GDP equal to € 63 billion a year. In addition, a 10% increase in the number of contributors will increase the European Union 's GDP by 0,6%, to around € 95 billion a year. However, as the analysis found, the main advantages of Open Source are not necessarily related to cost savings or return on investment - but also Open Standards and interoperability along with vendor independence and proprietary software.

Many small and medium-sized enterprises (SMEs) contribute to Open Source developments, as more than 75% of the companies involved had less than 100 employees. An interesting finding is that the smaller the company, the more active it was in its software contributions. The consortium is also conducting a survey of software development companies and so far the results show that the most significant benefits they see in Open Source are finding solutions to technical issues and seeking knowledge, which show the innovative potential of open source developments. 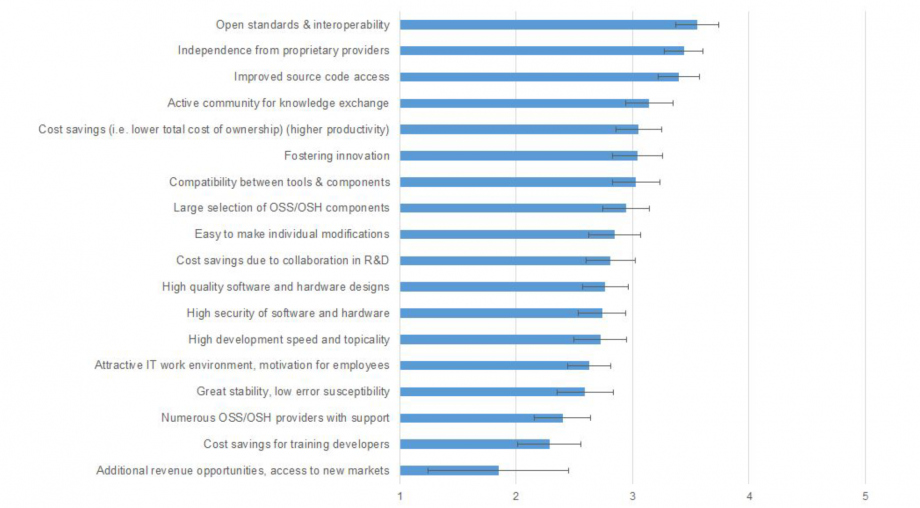 Benefits of open source software and hardware, according to research (on a scale of 1 - very low to 5 - very high)

However, there are no cost-free benefits, and as the companies surveyed point out, the biggest financial issues for them are related to ensuring software stability and the high labor costs of skilled workers. Not much open source research data is available due to the relative immaturity of the ecosystem, but the final report will present a more detailed analysis based on unique case studies of selected major Open Source projects such as RISC-V and Arduino.

On the policy side, the study team concluded that many governments have introduced different measures to support open source software developments, but their implementation is lacking in many areas. The level of detail of a given legal text is less important than the overall "transparency culture" (Open Source / Data / Innovation, Government) for a positive outcome.

These results shed light on the economic and social impact of Open Source as well as related policy initiatives, as no similar analysis has been made in recent years. The recent Open Source Software Strategy 2020-2023 underscores the importance of supporting the Open Source ecosystem, and this study may contribute to the future integration of Open Source into wider policy discussions.