How to increase dedicated video memory (VRAM) in Windows 10

What is dedicated video memory? How much VRAM do you have? How can you increase VRAM? Here's everything you need to know. 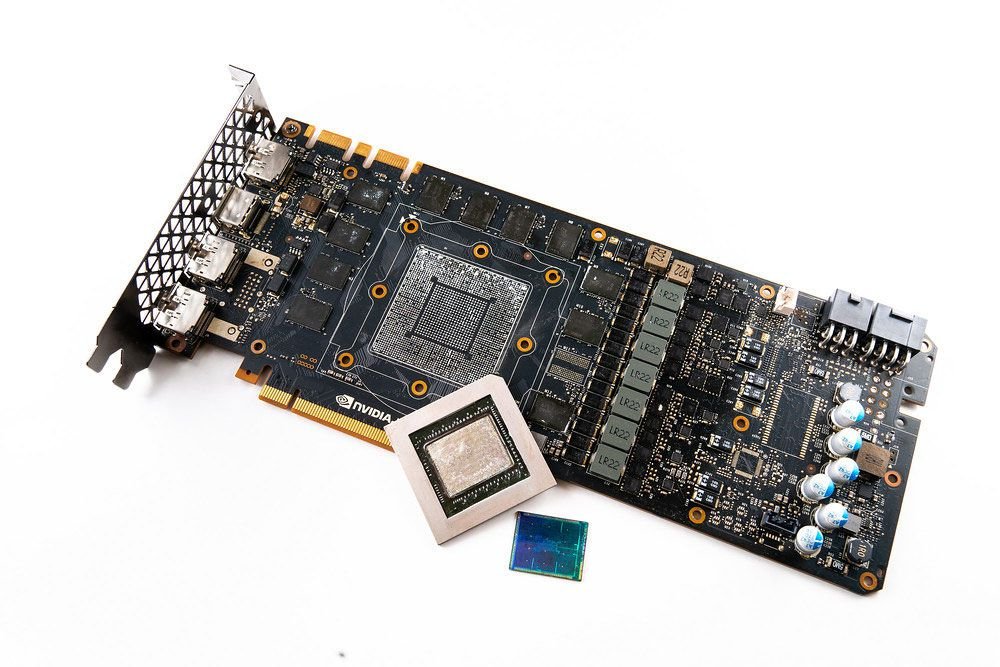 Do you see errors related to exclusive RAM (VRAM) video on your Windows computer? You try to run programs with strong graphics, such as video editors and new video games, but in the end they hang you? You may need more video memory (VRAM).

But what is this VRAM, and how can you increase it? Read below for everything you need to know about video memory in Windows 10.

Video RAM (or VRAM or video memory in Greek) is a special type of RAM (memory) that works with your computer's graphics processing unit (GPU).

The GPU is a chip in your computer's graphics card (also called a video card) that is responsible for displaying images on your screen. Although technically incorrect, the terms GPU and graphics card are often used interchangeably.

Video memory contains the information the GPU needs, including the texture of a game and the lighting effect. This allows the GPU to quickly access the information and video output on your screen.

Using video memory for this task is much faster than using your system's general RAM because video memory is of better quality and of course more expensive. Respectively, VRAM has been built for this very demanding purpose (for video) and so it is "exclusive". 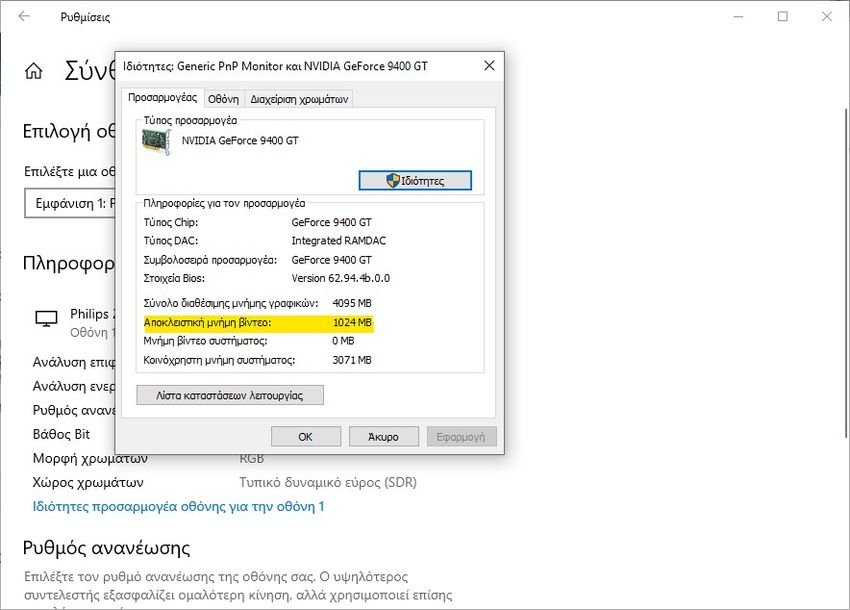 You can easily see the amount of dedicated video memory you have in Windows 10 by following these steps:

In the Adapter Type section, you will see the name of your Nvidia or AMD graphics card, depending on your device. If you see AMD Accelerated Processing Unit or Intel HD Graphics (most likely), you are using embedded graphics.

The best way to increase video memory is to buy a new or better graphics card. If you use built-in graphics and suffer from poor performance, upgrading to a better quality card (even one of the best yet affordable graphics cards) will work wonders for video output.

However, if you do not have this option (as on laptops or due to lack of money), you may be able to increase the exclusive VRAM in two ways.

How to increase VRAM in BIOS.

The first method is to customize the VRAM distribution in your computer's BIOS. Enter your BIOS and look for an option in the menu called Advanced Features, Advanced Chipset Features or something similar. Inside, look for a subcategory called Graphics Settings, Video Settings, or VGA Share Memory Size.

These should contain an option to adjust the memory available on the GPU. The default is usually 128MB. Try going up to 256MB or 512MB if you have enough space.

However, not all CPUs or BIOS have this option. If you can not change it, there is a solution that can help you.

Fake VRAM increase
Because most embedded graphics solutions automatically adapt to use the amount of RAM they need, the details listed in the Adapter Properties window do not matter. In fact, for embedded graphics, the Dedicated Video Memory value is completely virtual. The system mentions it though it is a fake value so that games see something when they check how much VRAM you have.

So you can modify a registry value to change the amount of VRAM that your system mentions in games. This does not really increase your VRAM. It just modifies this fake value. If a game refuses to start because "you do not have enough VRAM", increasing this value can fix the problem.

Open a Registry Editor window by typing regedit in the Start menu. Remember that from the Registry you can irreparably damage your system, so be careful while you are here.

In the left pane, right-click the Intel folder and select Create> Key. Name this key GMM. Once you have done that, select the new GMM folder on the left and right-click on the right side.

Choose Create> DWORD Value (32-bit). Name this new value as DedicatedSegmentSize and give it a value, making sure you select the Decimal option. In megabytes, the minimum value is 0 (deactivation of the entry) and the maximum is 512. Set this value, restart your computer and see if it helps a game run better.

These methods are not guaranteed to solve video memory problems, but if you run into problems it is worth trying. If you do not have a lot of system RAM and are having trouble running games with built-in graphics, try adding extra RAM or freeing up RAM to use the built-in graphics.

Like most tasks, upgrading your hardware solves the problem immediately, but it is usually very difficult on a laptop, and is simple on a desktop.

Before we talk about specific numbers, we need to mention which aspects of games and other high-demand graphics applications use the most VRAM.

A big factor in VRAM consumption is the resolution of your screen. The video memory stores the frames in the buffer, ie it keeps an image before and an image that appears on your screen at all times. Higher quality outputs (such as 4K games) use more VRAM because they contain higher resolution images and therefore need more pixels to display.

In addition to the resolution of your screen, the texture in a game can drastically affect how much VRAM you need. Most modern computer games allow you to adjust the graphics settings, either in terms of performance or visual quality.

Some time ago you might have been able to play a game in low or medium settings with a cheap graphics card (or even with built-in graphics). But the setting for high or extremely high quality that make the texture of a game look even better than usual, requires a lot of video memory.

Settings such as anti-aliasing also use more VRAM due to the extra pixels required. If you play on two screens at the same time, this is even more demanding.

Certain games may also require different amounts of VRAM. A game like Overwatch is not very demanding on graphics, but a game with a lot of advanced lighting effects and detailed textures like Cyberpunk 2077h needs more resources.

In contrast, a cheap card with just 2 GB of VRAM (or with built-in graphics) is enough to run old computers. The games at that time did not have 2GB VRAM at their disposal.

Even if you are not interested in games, still some popular software, which also requires a lot of VRAM, you will need to run at some point. XNUMXD design software such as AutoCAD or SOLIDWORKS, especially image editors such as Photoshop and high quality video editing, will suffer if you do not have enough video memory.

It is clear that there is no perfect amount of VRAM or it is not the same for everyone. However, we can provide some basic guidelines on how much VRAM you should target on a graphics card.

However, you should consider the above generalizations. Graphics card manufacturers add the right amount of VRAM to a card, depending on how powerful the GPU is.

Thus, a cheap € 75 graphics card will have a small amount of VRAM, while a € 500 graphics card will contain much more. If a weak GPU is not strong enough to deliver video that requires 8 GB of VRAM storage, it is useless to have so much VRAM on the card.

You do not need a top card worth 800 € with 12 GB VRAM, to play 2D simple videos on Youtube. You only need to worry about how much VRAM you will get when a card you want to buy is available in many VRAM configurations.

Remember that like regular RAM, more VRAM does not always mean better performance. If your card has 4 GB of VRAM and you are playing a game that uses only 2 GB, upgrading to an 8 GB card will do nothing remarkable.

On the contrary, not having enough VRAM is a huge problem. If the VRAM is full, the system will have to rely on standard RAM and performance will suffer. You will see a slower frame rate, an emerging texture and other adverse effects. In extreme cases, the game may slow down and eventually not be able to play.

Remember that VRAM is only one factor in performance. If you do not have a strong enough CPU, the performance of an HD video will not be correct. Lack of RAM will prevent you from running multiple programs at once, and using a mechanical hard drive will severely limit your system performance.

The best way to find out which graphics card and amount of RAM is right for you is to talk to a specialist. Ask a friend who knows about the latest graphics cards out there, or post on a forum like Reddit, asking if a particular card would work for you.

But budget desktops or laptops do not have video cards. Instead they use the built-in graphics of the motherboard.

This solution means that the integrated graphics card and CPU share the system's normal RAM, instead of the graphics using its own dedicated VRAM. This is an economical solution and allows laptops to display basic graphics without the need for a graphics card and extra power. But the built-in graphics card is a bad choice for games and graphics intensive.

How powerful your embedded graphics are depends on your CPU. Newer Intel GPUs with Intel Iris Xe graphics are more powerful than their respective cheaper and older models, but they are still a pale solution compared to individual special graphics.

Once your computer is a few years old, you should have no problems watching videos, playing low-demand games, and working with basic photo and video editing applications. However, playing the latest impressive games with built-in graphics on the motherboard is rather impossible.

Now you know what video memory is, how big you need it and how to increase it. Lastly, however, remember that video memory is a small aspect of your computer's overall performance. A weak GPU would not perform well, even with a lot of VRAM.

Therefore, if you want to increase the performance of games and graphics, you will probably need to upgrade your graphics card, processor and / or RAM first and then VRAM.