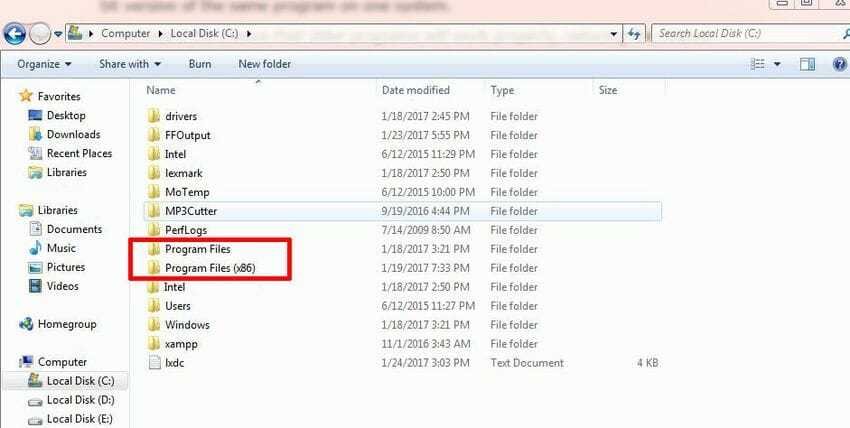 And if you ask what the difference is between these folders, you will obviously tell us that Microsoft, after the appearance of Windows 64-bit operating systems, decided to separate the installed programs running on 64-Bit from those running on 32-bit. And so, 64-bit machines have both folders (compared to 32-bit machines that have only one Program Files) with 32-bit programs installed in the "C: \ Program Files (x86)».

Of course, 64-bit applications can not run on a functional 32-bit Windows, even if the machine is 64-bit (yes, 32-bit Windows can be installed on a 64-bit CPU and motherboard)

What's stored in each folder
In short, a 32-bit version of Windows just has just one "C: \ Program Files" folder. This includes all your installed programs, which are 32-bit.

Why did they divide them?
Due to compatibility. Because 32-bit programs may not be aware that they are running on a 64-bit version of Windows, they split them so that Windows can keep them away from 64-bit code.

32-bit programs can not load 64-bit libraries (DLLs), and they will crash if they try to load a specific DLL file and find a 64-bit machine instead of the 32-bit counterpart. The same applies to 64-bit programs. Keeping the separation between different program files designed for different CPU architectures prevents mistakes.

This means that in "Program Files (x86)" there are programs that use the older x86 CPU architecture. Note also that the 64-bit version of Windows can not run 16-bit code.

If you use a portable program, it can run from any folder on your system, so you do not have to worry about where to place it. You can also put your portable applications in the Dropbox or another type of cloud storage folder so that they are available from all your computers.

If you are not sure if a program you have installed is 64-bit or not and you are looking for its installation folder, you may need to examine both program file folders to find it.

You can also take a look at Task Manager. 32-bit programs are listed by adding "(32-bit)" immediately after their name, which gives you an indication that you will find them in C: \ Program Files (x86).