Bibliometric analysis for the period 1996-2010, with elements of the international database Scopus & interactive maps
for each Greek region 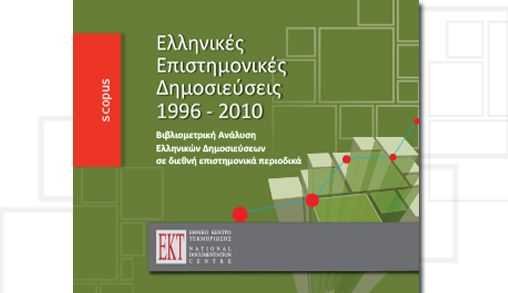 Still, aiming to better illustrate and highlight the regional dimension of Greek scientific and research activity, the ESF has mapped in its interactive maps the main bibliometric indicators in each Greek region (http: //metrics.ect.gr/map-diagrams).

The new study, based on data from the Scopus international bibliographic database, is the third in a series of studies (www.ect.gr/metrics) established by the ESF in order to provide a reliable basis for presenting and monitoring the evolution of the elements that determine the research environment of Greece compared to that of the EU and OECD countries.

By presenting indicators derived from the two established international databases (Web of Science of Thomsonto Reuters: the two previous studies, and Scopus of E.lsevier: current version), the ESF gives a fuller picture of important indicators that characterize the current reality as well as the evolution of scientific production in the country and broadens the number of Greek publications and the scientific fields covered. Thus, the well-established bibliometric indices reflecting the current reality of Greek research activity are being defined in a way that can be exploited at the level of policy-making, research, technological development and innovation.

According to the results of the study, Scopus data confirm that during the period 1996-2010, Greek publications are dynamically placed in the international environment in terms of impact, originality, quality and awareness. Global indicators and Greece's position in the EU, the OECD and internationally upgraded, the impact of publications is increasing and the performances of the agencies are improving. The number of reports in Greek publications, which is the basis for calculating bibliometric indices, continues to increase.

Maps are continuously enriched, including additional indicators reflecting regional research dynamics, such as participation in European works by 7th Framework Program for EU research to present a full picture of regional excellence and competitiveness.

The development of the online environment for the electronic version of the study was carried out in the context of the operation "National Information System of Research and Technology / Social Networks - Content Produced by Users" (www.epset.gr) implemented by the ESF in the framework of the Operational Program "Digital Convergence" (NSRF 2007-2013), co-financed by Greece and the European Union-European Regional Development Fund.

For the statistical processing of data and the calculation of reliable bibliometric indicators, the ESF has developed a specialized software, methodological approach and control techniques. For the presentation of the results, the electronic version, which includes interactive diagrams, with multiple possibilities for presentation and adaptation to the readers' needs was chosen. It also provides the opportunity for feedback from readers to contribute to a creative dialogue on research in Greece. The study is also available in English.

The results of the study

The number of Greek scientific publications has risen steadily to 2009, at rates significantly higher than those of the European Union and the OECD. 2010, this steady upward trend is halted, and Greece records a negative change rate. Based on 2010 data, Greece participates in 2,4% of EU scientific publications and 0,85% of the OECD, significantly increasing 1996 shares.

The relative magnitude of Greek publications continues its upward trend throughout the 1996-2010 period, and with the 1,04 value being the same as the average of the OECD countries, it is set at 0,90 in relation to the EU.

Improved are also the other indicators measured in the study and related to the recognition of Greek scientists and the impact of their research work on the international community. In the five-year period 2006-2010, the percentage of publications receiving references (% cited publications) for Greek publications is set to 65,6%.

Who produces the most scientific publications

The highest reporting rates are achieved  GSRT Research Centers and Private Health Bodies, with 75% and 69,5% respectively in the five-year 2006-2010. In addition, publications from the Research Centers supervised by the GSRT and the Private Health Bodies, with relevant impact indicators 1,20 and 1,18 respectively, are more successful than the global average.

With whom the Greek researchers work together

Throughout 1996-2010, there has been a significant increase in collaborations between Greek entities, a potential result of funding of national consortia for the implementation of research projects. The number of collaborations with the international research community is also increasing, albeit at a slower pace than the Greek partnerships.

Over the past five years 2006-2010, Greek scientists have collaborated with scientists from 166 countries around the world. The largest number of collaborations is with the United States, the United Kingdom, Germany, France and Italy.

The collection of reliable data, statistical information and the production of indicators describing Greek scientific and research activity is one of the key actions in the ESF. Through its digital environment www.ekt.gr/metrics visitors get open access to:

•       Intelligent Reports on the performance of Greek researchers, geographic and thematic areas of excellence

•       Interactive maps depicting in each Greek region data and indicators that highlight its characteristics in research, development and innovation.

Addresses on the Internet

Indicators of Research and Innovation

The National Documentation Center (www.ect.gr) is a scientific installation of national use at the National Hellenic Research Foundation. As a national infrastructure, the ESF has an institutional role to collect, organize and disseminate scientific and technological information inside and outside the country. It also provides information on research and innovation issues, and supports participation in national and European programs and the exploitation of research results.

With constant presence in the Greek scientific community from 1980, the ESF utilizes Information and Communication Technologies, combined with modern business methods, to develop innovative actions geared to enhancing open access to digital content science and culture. For this purpose, it works with major producers of reputable content such as libraries, archives, museums, research centers.

More than 5.500.000 digital repositories of electronic repositories, scientific journals and digital libraries are already available from the National Information System for Research and Technology (www.epset.gr), the main development work of the ESF, which forms the electronic infrastructure for scientific information and research data.