[One_third]"The only part of the government that actually listens"[/ one_third] Over the past two months, the NSA name is everywhere. In all newspapers, magazines, social networks. Thousands of articles have been written on a global scale and, as they appear, will continue to be written. Of course the Secret Service and the US government are quite annoyed. Apart from the subversive response of the United Kingdom secret service who invaded the offices The Guardian and destroyed all of the newspaper's hard drives, the NSA, and the US government in general, have tried to keep their pretensions. In addition to arguable declarations-excuses, they have not apparently made at least an inaction such as that of GCHQ.

The NSA has reportedly demanded that an American company stop selling T-shirts with the NSA logo on them and the message "The only part of the government that really listens to us," according to the Daily Dot. 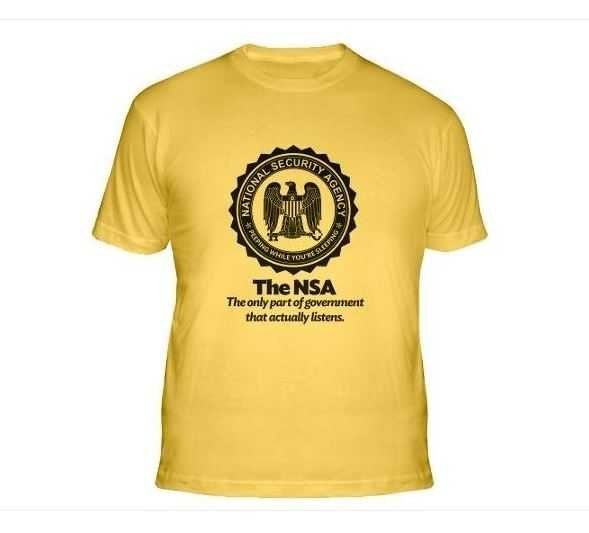 The company Liberty Maniacs presented a number of different T-shirts and other objects with the above slogan. The site was very interesting for the series Zazzle.   But after their first presentation on the website, Dan McCall, the founder of Liberty Maniacs, discovered that the T-shirts had been removed from its online shelves. Zazzle. So he tried to contact the company and here is the answer from liberal America that criticizes censorship and puts above all the Freedom of Speech and the freedom of its citizens

"Representatives of the National Security Service contacted us, and their request was to remove the products from the Zazzle Marketplace."

The Daily Dot has finally received a statement from the NSA, claiming that the service mark is protected by public law and that no one can use it without written permission. Of course, they denied that they asked for the product to be taken off the "shelves" of Zazzle.

NSA Hackers had violated the Al Jazeera and Aeroflot networks