Seven billion of the Earth's inhabitants did not realize the slightest, but last September the planet had been "wound up" for four weeks by a very strong rays of charged particles. NASA's research vessels uncovered the transient existence around the Earth of a third radiation band Van Allen, which scientists ignored. After the first surprise, experts are excited to study the phenomenon, which may be dangerous for satellites, manned space missions and terrestrial electronic systems. 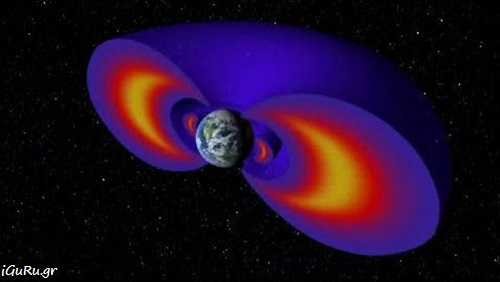 The radiation bands of Van Allen were discovered by 1958 from James Van Allen, from which they took their name. These are two rings formed of high energy particles - "killer electrons", as they call it - that are trapped in the Earth's magnetic field.

The inner zone, which is closest to our planet, is relatively stable. The outer band, which begins to extend from an altitude of 13.000 to 40.000 km from the Earth's surface, is extremely unstable and shows tremendous variations. Within a few hours, or even minutes, the electrons that make up it can touch the speed of light while its size can be hundreds more.

Although their existence has been known for decades, scientists do not know much about these radiation bands, except that they can cause damage to satellites and spacecraft or even to electronic systems here on Earth. On 30 August 2012, NASA launched the two Van Allen research vessels to gather more information about them.

On September 2, just a few days after their launch, the Van Allen satellites were surprised. Researchers at the University of Colorado at Boulder, who have developed the instruments that carry the research vessels, have seen a third radiation band in front of their eyes in a process that is not predicted by any theory.

"It was so strange I thought something was wrong with the instruments" reported in the press release of the university Dan Baker, lead researcher of the project and lead author of the study published in the journal Science. "But we saw identical data on the second boat. We could only conclude that it was true ".

While the initial data showed the two Van Allen zones exactly as they should be based on theories, on the second day of September the outer band began to become very compact (forming a "storage ring" as the researchers called it) while a third , the thinnest, electron ring was formed on the outside. The outer ring began to break in the third week until finally 1η October, a powerful interpolated blast wave coming from the Sun had totally dismantled its remnants and along with the "storage ring" within an hour. Then the two "expected" radiation bands were re-formed, which remained in the months to come. (Credit DN Baker et al)

VirusTotal: Make sure a file is secure before downloading

The discovery certainly leads the experts to the conclusion that they should re-examine their theories, but for now many parameters are unknown, with the frequency of the third zone being the first and most important. "We have no idea how often this happens" said Dr Baker. "It may happen quite often, but we did not have the right tools to look at it".

Scientists also do not know where the electrons that form the "storage ring" originate, nor what causes the charged particles to accelerate, although they think it should be related to solar activity and its interaction with its magnetic field Earth.

The next data of the Van Allen satellites are therefore expected to be of particular interest, not only by the research team, but also by the theoreticians dealing with the Earth's magnetic field and space. "Discovery really confronts us with a very important question and many important riddles" said in New Scientist magazine Yuri Sprits of the University of California at Los Angeles who did not participate in the research team but is preparing a study on the subject.

As the expert said, last September no satellite malfunctions could have been associated with the phenomenon.