Void Linux is a Linux distribution that aims to provide a powerful yet easy-to-use operating system. It is designed to be simple and stable and achieves this through the use of runit and its own small package manager.

Similar to Arch Linux, Void Linux follows the "rolling version" model and has a "user-centric" approach to its use. This means that Void Linux is constantly updated, but it is also completely naked during its first installation. This makes Void Linux appealing to experienced users who want to have a flexible operating system that they can fully understand and operate.

Why use Void Linux?

Void Linux aims to keep the operating system simple. The use of runit as init system, means that all currently running service scripts are just files that can be viewed in the "/ var / service /" directory and can be easily added, modified or removed from "/ etc / sv / ”.

Additionally, Void Linux uses the X Binary Package System (XBPS) package manager. This ensures that the user does not need to install additional package managers and that an affordable toolkit for packages created by its users is also available. Overall, this results in an operating system that is both easy to maintain, flexible and stable.

Void Linux was created in 2008 by Juan Romero Pardines, a former NetBSD developer, to have a test-bed for the XBPS package manager.

In May 2018, the project was moved to a new website and code repository by the core team, as the project manager had no updates for several months. From December 2021, Void is the fourth project with the highest score on the DistroWatch with a score of 9,07 out of 10.

Void is a notable exception to most Linux distributions because it uses runit as its primary system, instead of the more common systemd used by other distributions such as Arch Linux, CentOS, Debian, Fedora, Mageia and Ubuntu. .

It is also unique among distributions, as separate software repositories and installation media are available, using both glibc and musl.

Void was the first distribution to integrate LibreSSL as a system cryptography library, by default. In February 2021, the Void Linux team announced its return to OpenSSL on March 5, 2021.

Due to their nature rolling versions, a system running Void is kept up to date and always has the latest version. Source packages are stored on GitHub and can be compiled using the xbps-src system.

The package creation process is performed in a clean environment, not connected to the current system and most packages can be cross-compiled for foreign architectures.

As of April 2017, Void Linux supports Flatpak, which allows the installation of the latest packages from upstream repositories.

You can download a copy of Void Linux ISO from here and you will be able to choose between two flavors: base and xfce. The first provides installation without a desktop environment, while the second comes with XFCE.

In our example we will install xfce on a virtual machine, specifically on the virtualbox. 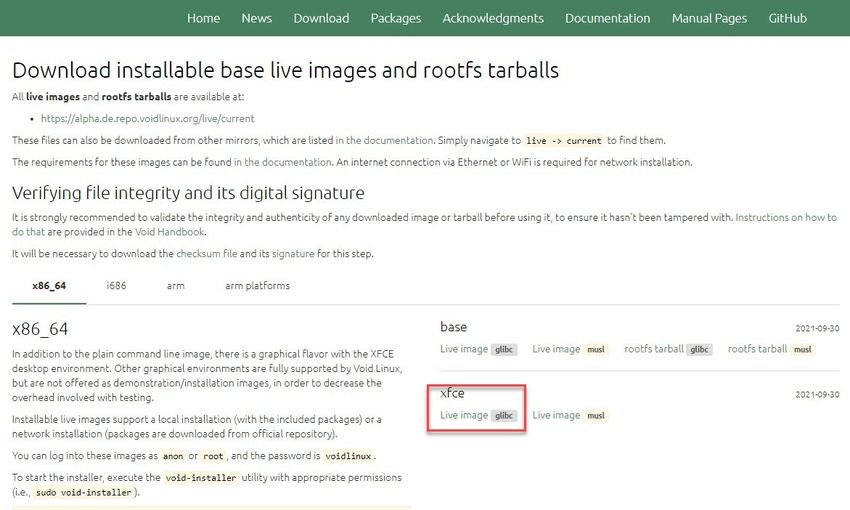 Musl, on the other hand, is a simpler implementation of the same C library, but its recent implementation means that not all programs will work properly with it.

To install Void Linux you will need a USB stick of at least 4 GB or more and software to write the installer to USB. You can use the balenaEtcher, regardless of the platform you use.

With bootable USB, you can boot the live image of Void Linux via your BIOS boot menu. Insert the USB into your computer and boot it.

If you want to install it on a virtual machine like us, just create a Linux machine one by one and boot it from the iso file you just downloaded.

Once launched, you will be greeted with the Void Linux boot menu. 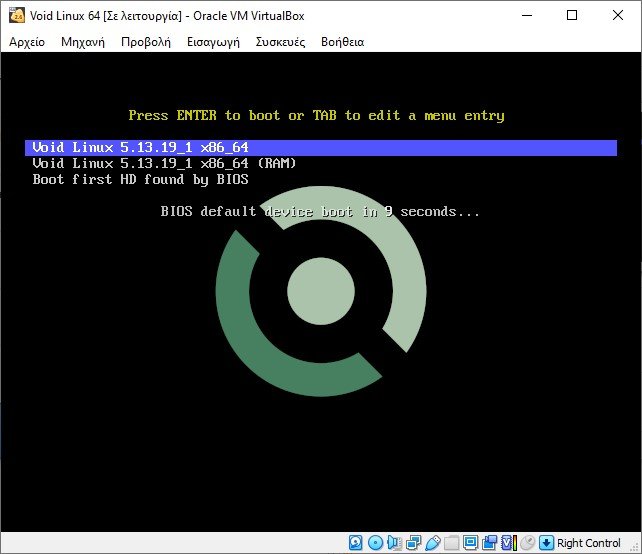 Normally you will not need to do anything and the live operating system will load completely by itself, showing you the following screen: 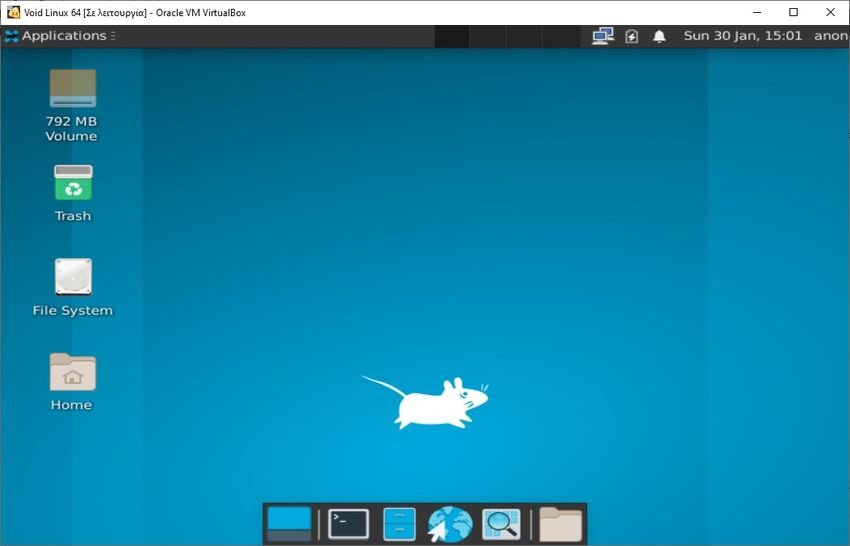 It did not take more than 20 seconds on the virtual machine to fully read and run the live.

During the installation process it will ask you:
a. the login user. You must be logged in as "root" or "anon" with the password "voidlinux". You change the password later.
b. keyboard layout (usually we put)
c. network
d. the installation source (in your bottle or from the internet)
e. hostname
f. language, time, new root password
g. user setting (name, password, group)
h. the installation disk, with graphics or not

i. The partitions of the disk. Select the same disk you selected for the bootloader. The wizard will then ask you which tool you want to use to split the disk. Select “cfdisk", As it is simpler and easier to use. If you are using a blank disk, cfdisk will ask you for a label type. Select “gpt", As it is more flexible and can handle larger drives compared to other types of labels.

j. The cfdisk partition layout will largely depend on whether you are using a UEFI or BIOS system. For a UEFI system, you will need to create four partitions.
You can do this by selecting "Free space" with the keys and the cursor and selecting "New". Cfdisk will then ask you for the size of the partition you want to create. 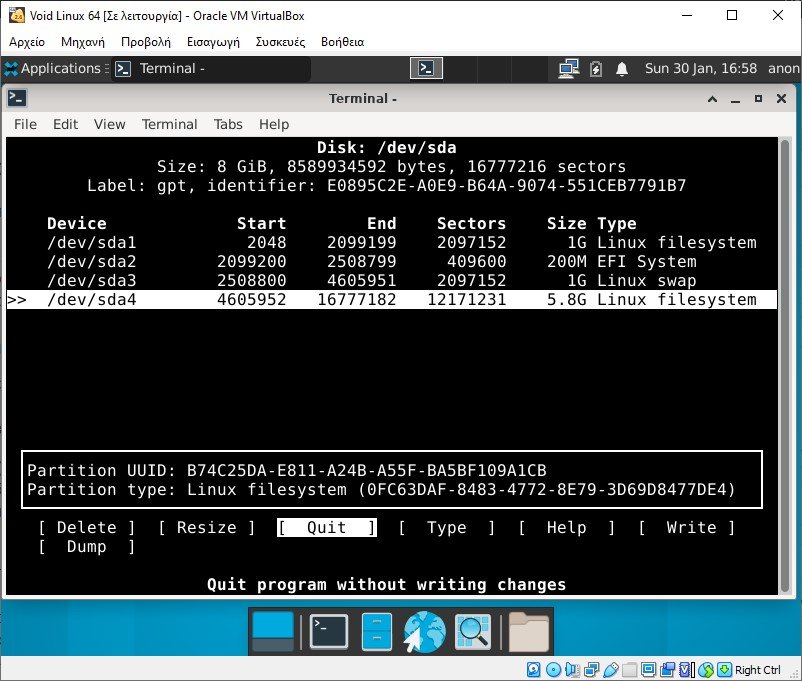 Once done, you can now select the "Write" option on cfdisk and type yes to confirm the partitions. After that, you can now exit cfdisk by selecting Quit. 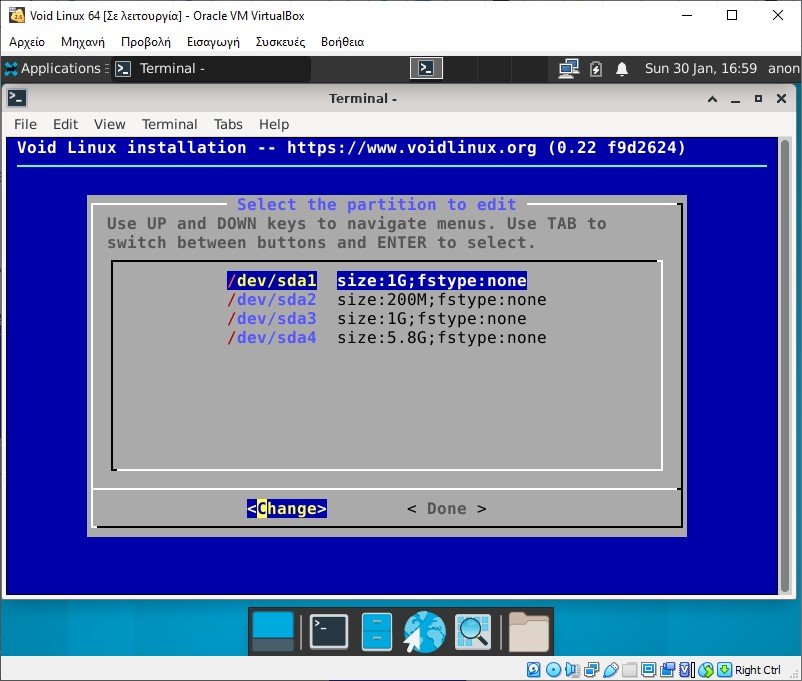 If you want to see your settings click on "Settings", otherwise continue the wizard by clicking on "Install". It will warn you about the data that will be erased from your disk. Click Yes and the installation begins. 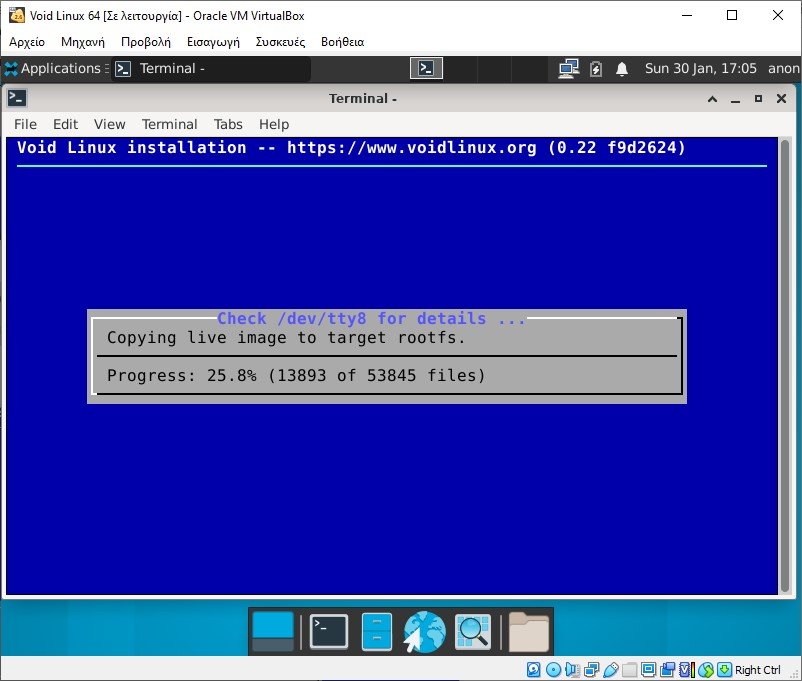 Installation should not take long. Once completed, the wizard will display the "Installation Success" screen. Select Yes to restart the machine on Void Linux.

Congratulations! You now have a Void Linux installation with Xfce. From here, you can install anything you want.

If you want to install it on a machine with Bios and not with UEFI or even on a virtual machine (as we did with virtualbox) then you need to change your settings to (j) and (k).

In (i), ie in the partition layout you must first put a new partition of size 1M and with Type "BIOS Boot". 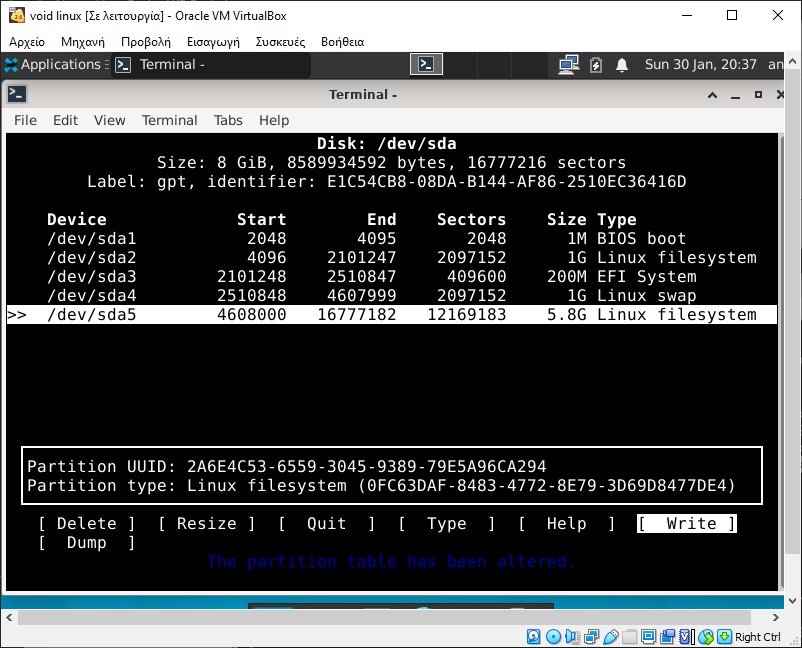 In (k), ie in the filesytem you should not give it any settings and respectively your final screen before the installation will be: 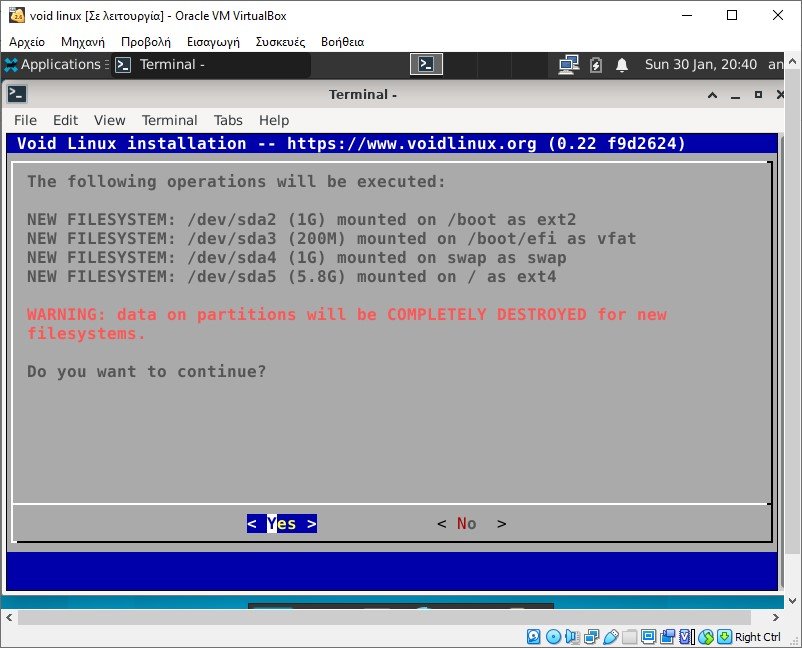 This way the installation will not show you the error: "void linux failed to install grub to / dev / sda" and will proceed normally. After the reboot do not forget to remove the iso file from the virtual dvd player, so that it reads the disc and shows you the new input screen: 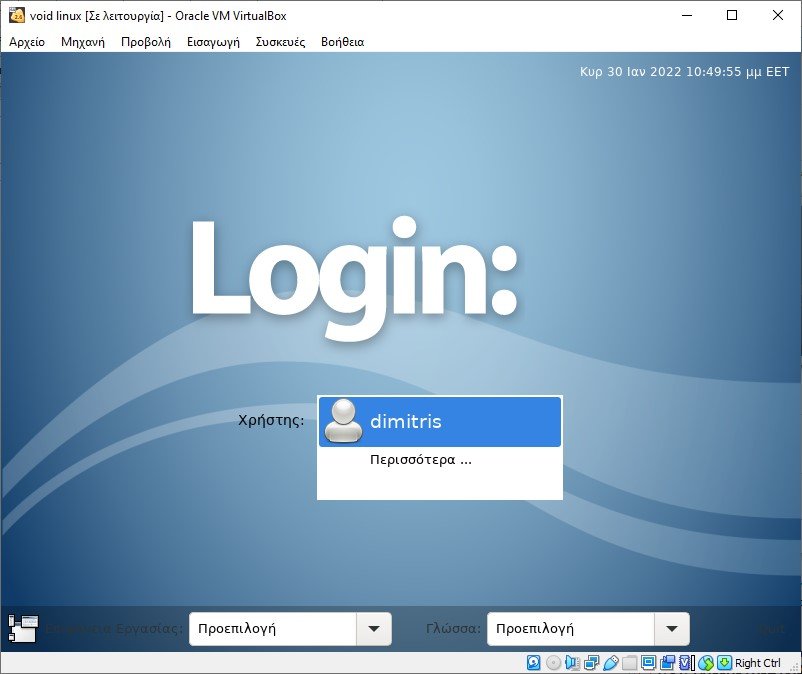