In previous publication we mentioned the Wi-Fi 6, the next-generation wireless standard that is faster than 802.11ac. But besides speed, it will provide better performance in congested areas, from fields to your home. We will see 2019.

Wi-Fi as we mentioned yesterday has version numbers! Even old Wi-Fi names like "802.11ac" have been renamed user-friendly names like "Wi-Fi 5."

Below are the versions of Wi-Fi:

However, older versions of Wi-Fi that are not widely used have also been named:

As usual, the latest Wi-Fi standard offers faster data transfer rates. If you are using a single-device Wi-Fi router, the maximum speed should be up to 40% higher with 6 Wi-Fi than the previous 5 Wi-Fi. 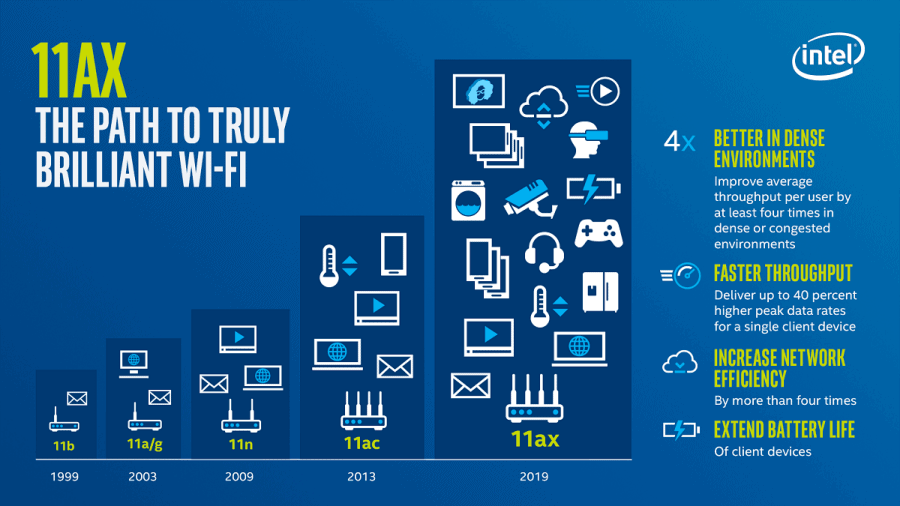 Wi-Fi 6 is faster due to more efficient data encoding, resulting in much higher performance. More data is compressed on the same radio waves. The chips encoding and decoding these signals continue to become stronger and can handle larger amounts of data.

The new standard increases speeds even on 2.4GHz networks. Although the industry prefers Wi-Fi at 5GHz for less interference, 2,4GHz is even better at penetrating solid objects.

When the router "talks" to a device (like your smartphone), it can tell the device exactly when to put Wi-Fi to sleep and when to wake up to get the next transmission. This will save energy on the devices, because Wi-Fi will have more time in standby mode. This of course means longer battery life.

Wi-Fi does not give a good signal when you are in a busy area with many devices that use it. Imagine a busy stadium, an airport, a hotel, a shopping mall. Maybe your connection is very slow.

The new Wi-Fi 6, also known as 802.11ax, will bring many new technologies to help with this problem. Intel says Wi-Fi 6 will improve the average speed per user by "at least four times" in congested areas of the network.

This is not only true for busy public places but also for your home if you have many devices connected to Wi-Fi.

Why Wi-Fi 6 is better at congestion

Though you do not need to know the details, a Wi-Fi 6 hotspot with a Wi-Fi 6 device will work best. Let's see why:

Wi-Fi 6 can split a wireless channel into many subchannels. Each of these subchannels can carry data intended for a different device. This is due to Orthogonal Frequency Division Multiple Access (OFDMA) technology. The Wi-Fi hotspot can "chat" with multiple devices at the same time.

Many hotspots located close to each other may broadcast on the same channel. In this case, the router listens and waits for a clear signal before responding. With Wi-Fi 6, wireless access points close to each other can be configured to have different Basic Service Set or BSS colors. This "color" is simply a number between 0 and 7. So if a device checks if there are clear channels to listen to, it may notice some weak signal transmission and a different "color". It will then ignore this signal without waiting, to improve performance in congested areas.

If you want to buy a new device, you will not have to read the whole manual. The device manufacturer will indicate that it has "Wi-Fi 6" or "Wi-Fi 5."

You will also start to see the “Wi-Fi 6 Certified” logo on devices that have gone through the Wi-Fi Alliance certification process. Before, there was a "Certified Wi-Fi" logo that did not mention the product generation.

These Wi-Fi 6 routers should also support WPA3 for safer connections to Wi-Fi networks, but WPA3 support is not required.

When will you get it?

ASUS announced the RT-AX88U router. It has some 802.11ax technologies but does not support the final standard, which is not yet complete.

Some routers may already be advertising "802.11ax technology", but Wi-Fi 6 has not yet been finalized. Also, devices that support Wi-Fi 6 are not yet available.

The Wi-Fi Alliance expects the standard to be finalized and 2019 will be released at some point. After 2019 we will see new routers, smartphones, tablets, laptops with new technology.