The serial continues…. After several extensions, Microsoft continues to offer free upgrades to Windows 10 from its PC-assisted upgrade page.

As we have said in a previous publication January 16 is (again) set by Microsoft to be the last day of free upgrades to Windows 10, from earlier operating systems.

For the July 2016 story, Microsoft officially completed the Get Windows 10 program, which allowed anyone who ran a supported version of Windows to a free upgrade to Windows 10.

However, the free upgrade offer remained open (in fact, like the fairy tale with Kapodistria's potatoes) for people using support technologies in Windows 7 and 8.1.

Of course, the company did not confirm whether all those who upgraded their systems were using support technologies.

Microsoft has recently extended the upgrade offer deadline by January, after the previous one expired (not expiring) on ​​December 31 of 2017.

This free upgrade would obviously have little effect on the absorption of Windows 10 as it did not concern businesses, and those people and small businesses did not upgrade for two years and more are unlikely to do so at the last minute. However, the company continues to offer the upgrade offer even today 17 January 2018 (hope dies last ..):

In November of last year, Microsoft announced that Windows 10 was installed in approximately 600 million devices.

But if there are some who still think about it: 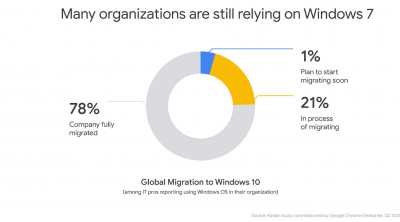