Microsoft has released a new version of Windows 10 19H1 for Fast ringers and according to changelog includes many new features and changes to the operating system.

First of all, Windows 10 build 18298 brings improvements to the "Settings" application, in order to provide a simpler approach to the connection options. You can set security keys in Windows 10 from the Settings app in Accounts> Login.

There are also enhancements to File Explorer. This new version introduces a new icon specially modified to look better with the lighting time that is part of Windows 10 19H1.

Microsoft also announced changes to the default download folder as Microsoft introduces new sorting options in this version.
As Microsoft explains: “Most of the time, when you download a file, you do not rename it before downloading it. Because of this, the names are not always very clear (eg cake_134_small_red.jpg). This does not optimize name-based sorting, as it is difficult to find the file you are looking for, so in this version there is a default sort that displays the most recently downloaded file at the top of the list.

Additionally, there are enhancements to the Start menu that aim to quickly unlink groups and folders, as well as touch keyboard enhancements with improved accuracy. The Notebook has been refreshed with a set of new features, including an asterisk in the title bar to indicate when unsaved changes have occurred, and an option to send comments from the Help menu section.

Narrator gets its own share of updates in this version, and most importantly modifying the Narrator home screen that now allows you to access all the options in this mode. Of course, this should make it easier for you to work with the Narrator, whether it is a new setting or a change of existing configuration.

There are also several minor improvements to this version, and you can get them see all from here. 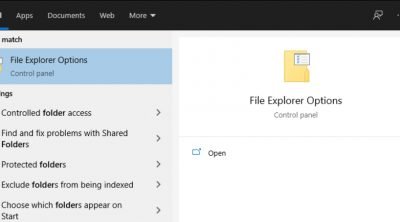 How to disable folder thumbnails in Windows 10

Europol: hundreds of arrests in Darknet
Next Post: The depths of the Earth are filled with alien microorganisms