A rare 4 M1944 Enigma cipher encryption machine, considered one of the most difficult challenges in decrypting the Allies, sold at Christie.'S auction for 347.250 437.955 (US $ XNUMX).

The bid for the electromechanical encryption machine was just above the top των 300.000 estimate expected at the auction.

As Christie House reports, the M4 Enigma has a special place in the history of computers, as the Allies' attempts to crack their encryption led to the development of the first programmable computer, developed in Bletchley Park and used to break the M4, allowing the Allies to track every German navy. planning from the Battle of the Atlantic to their delivery in mid-1945.

M4 Enigma (with 4 rotors) are considered rare because they were made in smaller numbers by three-rotor machines.

After capitulation to Germany, the country ordered troops to destroy the rest of the Enigma so that allied forces would not acquire them. After the war, Winston Churchill also ordered the destruction of all remaining Enigmas to help keep the Allies' secret of decoding successes at Bletchley secret.

The M4 Enigma (with 4 rotors) was built on the orders of Admiral Karl Dönitz, the commander of the German U-boat fleet, who was concerned about the Allies' repeated successes against his submarines.

The M4 became available to the submarine fleet in May 1941, preventing the Allies from knowing their position for almost a year until Turing and Joe Desch in Dayton, Ohio. developed the computer that broke the M4 encryption.

By mid-1943, most of the messages encrypted by the M4 Enigma were read by the Allies, but it was not until the 1970s that it became public that the Allies could read the encrypted messages of the Germans. 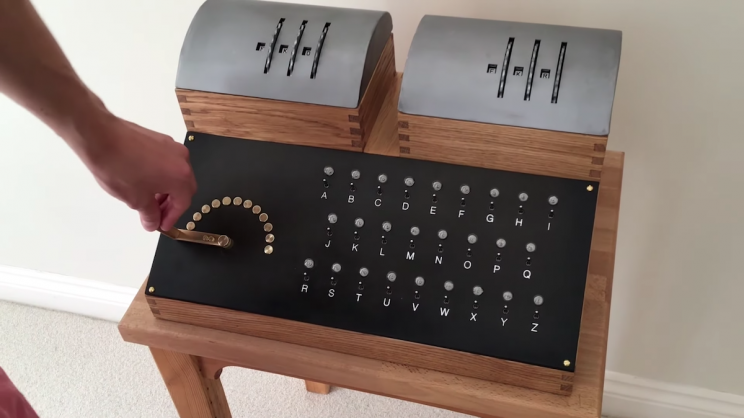 The first copy to decipher Enigma