The third part of the Codes and Cryptograms: Let us here again in another article about secrets, cryptography and cryptograms! In the previous two parts we have seen some remarkable techniques of the past centuries, which undoubtedly influenced modern forms of cryptography.

In this article we will refer to the most modern forms of cryptography and we will start our reports starting with Samuel Morse, whose last name is connected to the Morse code about which we have all heard.

In the middle of the 19 century technology began to be applied to communications by directly influencing cryptography. Codecs seized the opportunity and began looking for new ways to keep a message hidden.

The revolution became 1844 when US inventor Samuel Morse built the first telegraph line, covering a distance of approximately 60 kilometers, between Baltimore, Maryland and Washington.

On May 24 of that year, Morse sent the famous Bible telegram “Whatever God has done", From the Supreme Court room in Washington to his assistant Alfred Vale in Baltimore.

In Morse code the message would have been transmitted (in Greek) as shown below:

Long distance electrical communication was now feasible and marked a revolution that would have a big impact on society. Soon, companies have begun to implement technology to immediately close agreements, newspapers for news gathering speeds and ministries for national and international communications.

In a few decades, a dense network of telegraphic cables traversed all the oceans of the globe, effectively making communication instantly worldwide.

Despite its speed, however, the telegraph had a very serious defect: The lack of security!

Morse had devised a system of short and protracted beats to send messages through his network, but his codebook was of common use, so it was useless for secrets.

1853, an article in the English version Quarterly Review illustrated the problem:

Measures should also be taken to prevent an important one

today's objection to the sending of personal telex mail,

of violating any secrecy, because in any case, at least half a dozen people

they must know every word a person sends to another.

And they were not wrong, except for the employees of the telegraph office who read and transmitted the messages, anyone who owned a simple receiver device could hear them. Realizing this problem, dozens of people began to invent their own hypothetical inviolable cryptograms.

The process was simple, the text would be encrypted using a method and then the generated text would be sent with Morse code. So both the officials and the aspirants who would obey the messages would see nothing but gibberish.

One of the first services that was adapted to the new technology was the army, all the major military messages were encrypted using the old Viagener encryption encryption, the invisible chiffre indechiffrable (uncrypted cryptogram).

As we understand, the telegraph revolutionized cryptography and, after 450, reinvented years, in which codes and names were prevalent, the art of cryptograms!

Naturally, I personally embrace it universally, nothing in the latest technological development has come from parthenogenesis! I imagine reading these three articles describing various cryptanalysis techniques over the centuries, you will find out for yourself.

With cryptanalysis we have a repeat of ancient or medieval techniques, adapted to the technological skills of each age.

As we mentioned in previous article, Ioannis Trithemios was one of the first to use a table to create a multi-alphabet cryptogram. What happens when someone uses this table to define a key that you can't understand where to start without it? This was none other than Wisener.

Let's go straight to an example to understand what Weisener did in 1549. Let's say we want to encrypt the message. "AVOID THE NORTH" with Wisconsin cryptograms:

We use any keyword (in our case I chose the word “CODE") And write it as many times as we need to encrypt the sentence, as shown in the example above.

Then we look back at the table of Trithimios 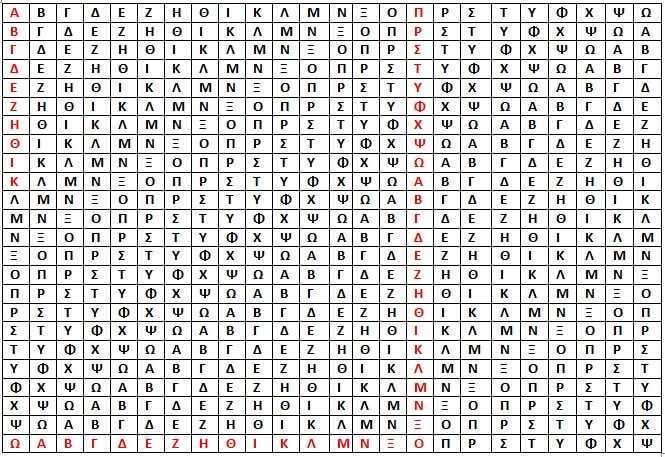 What we do is simple, go to the first line of the table and find the first letter of the proposal for encryption, that is to say in our example ( ΑGO HORSHIP) the letter "Α“. The corresponding letter of the key as shown in the table above is the letter “Κ", We understand down by following the letters until we find the letter"Κ”And with what intersects, we write it. (In the letter “Α"There is an exception because there is no column left so we write"Κ").

Let's look at one more example. The second letter of the encryption proposal (ΑΠSAVE THE BORE) it's the "Π", The corresponding letter of the key is"Ω", So go back to the first line, find the"ΠAnd they go down until we find the first pillar the "Ω“. The cross-over letter is the encryption letter, meaning “Ο".

Babaz is mentioned as the man who broke the awesome cryptogram of Vizner who uses the self-key, that is, he embodies the encrypted sentence into the key. We will not analyze a code in this case, because the article will be enormous. Certainly the encryption of this way is not done using the frequency analysis we saw in a previous article. Decryption is based on factors. The factor found most often indicates the number of letters in the key. A process that can keep days ..

The competition is aimed at our "for-sale" and non-readers, who have the luxury of devoting some of their free time to participate in another iGuRu.gr competition by discovering the cryptograms! Today's contest will be a little more complicated than it is previous because you have to go into my mind and guess the keyword (of course there will be help :)) in order to decrypt the encrypted message.

I suggested to the manager that the first five who would answer correctly take me out for food, but he replied that this is not in the interest of our audience, we give gifts, we do not take advantage.

So we decided after pressure that I accepted to give five licenses of the following program (here the review) to the first five who will send by e-mail the answer to georgios.koliou [at] iguru.gr :)

Which is self-encrypted. The key is the surname (in Greek characters as rendered by wikipedia) of a hero of B'PP who was criticized for his controversial nature, but his offer for the end of B'PP was huge.

We made extensive reference to this person here in iGuRu. By following the instructions in the above article and finding the self-key you will be able to decipher the sentence! 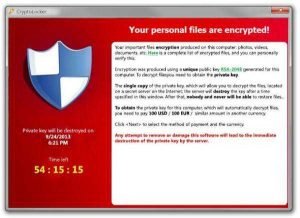 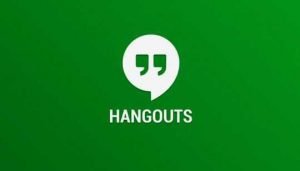