home / tweaks / How to Change Application Priority in Windows 10

How to Change Application Priority in Windows 10

As you may already know, Windows shares your PC's CPU resources with running applications. How much resources should be given to a process is determined by the priority. The higher the priority level, the more resources will be allocated to the process. In this article, we will show you how to set or change the priority of a process in Windows 10.

First of all, as in previous versions, so on Windows 10 there are 6 priority levels at your disposal, as follows:

Before proceeding, you should know the following. The real-time priority level should not be set. Not if you do not know what you are doing. This can cause system instability. An application running at this priority level can consume 100% of the CPU by cutting off keyboard and mouse service and rendering the PC temporarily useless.

To change the priority of the Windows 10 process, do the following:

1. Open Task Manager. If you do not know how, move the cursor to the bottom taskbar, right-click and select "Manage Tasks" from the popup menu
2. Click the "More Details" button to see all the tabs and go to the "Details" tab. There you will see all the applications and services that are currently running on your computer.
3. Right click I go to the process you want to change its priority. In the submenu you will see select "Prioritize", and in the next submenu set the priority you want from the list of 6 priorities in total.
4. You will see the following dialog box: "Do you want to change the priority of the process"… .. "Ή changing the priority of some processes can cause system instability". Select the "Change Priority" button and the change will take place. Otherwise select the "Cancel" button and your selection will be canceled.

You can always see what priority is set for each process you run if you choose to display the "Basic Priority" column in the details tab.

There is a way to start a process with the priority you want. This can be done with the "Start" command on the command line (cmd.exe). See how:

Windows will start the Notebook program with priority "higher than normal" instead of "normal" which is the normal value.
Of course, the command works not only for the Notepad but for any program and for any priority level (for example, Belownormal, High, Nosmal, etc.). Be sure to enter the route of the app you want to change correctly

Change the priority of an application running with wmic

Finally, using the wmic command tool, you can change the priority level of an application that is already running (already running). This trick can be useful to you in various automation scenarios.

1. Open a command line.
2. Type or copy-paste the following command:

Replace the "Process Name" section with the actual application name, for example, "notepad.exe".
Replace the "Priority Level" section according to the following table:

You can use the value number or priority name. The following two examples give us the same thing: 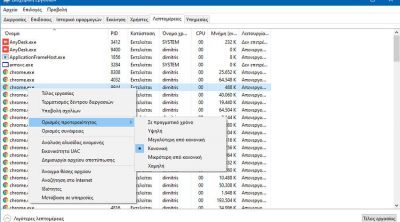 Krack: Should I be worried? everything you need to know
Next Post: Marianas web Deep Web and stories about wolves