Google this week released a Chrome extension that shows how many ads are loaded on any given webpage, who the advertisers are or which ad companies are on the page, and which user data has been used to display personalized ads.

The extension, by name Ads Transparency Spotlight, is available in the official Chrome Web Store. 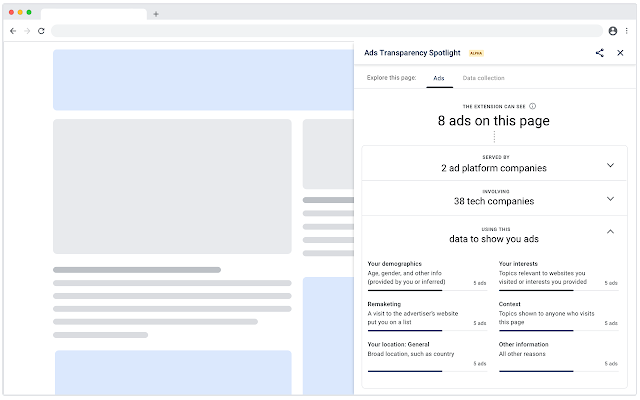 Google says it has released the extension to make it easier for users to understand how ads are displayed. The company used to present information about its own ads through the "Why this ad" link that it had incorporated into each ad, but this was a mechanism specifically for Google Ads.

The new Ads Transparency Spotlight extension was created using the new "Ad Disclosure Schema" API, which creates a uniform system through which advertisers can discover how their ads work.

At the moment, the Chrome extension only draws its information from Google's Ad Disclosure Schema and displays it in the extension, but Google hopes other advertisers will soon release a similar API / schema for their systems and make the most useful extension, while helping users understand how and why they see specific ads.

According to Google, the extension will display information such as:

Google stops Hangouts On Air and sends it to YouTube Live

In addition to companies that display ads directly, the extension will include companies in the advertising technology industry, such as companies that upload social media buttons, web analytics, or tracking scripts to the page.

The expansion, released this week, is part of a broader effort by Google to renew the advertising ecosystem and restore user confidence.

Starting in the spring of 2019, Google launched a project to change the basic principles of web advertising.

As ad-blocking extensions became more popular, and most browsers began to have built-in features for blocking tracking and fingerprinting, Google saw the future: Web was heading to a state where ads would be excluded from most apps. and sites that depend on ads will eventually disappear slowly, as they will not be able to have revenue.

Google's plan is to prevent such a future move that will block the toxic advertising system we have today.

The first thing Google did was remove third-party cookies, a technology that allows advertisers to track browsers with incredible accuracy.

Second, Google has developed a built-in ad blocker in Chrome that does not block ads on all sites, but only on those that misbehave.

As for the replacements of today's advertising technology, Google announced in 2019 the Privacy Sandbox, a new technology that will be integrated into Chrome and will work by sharing enough information from users so that advertisers can organize users into general groups , but without providing information for creating an individual profile. For example "this user likes sports cars" instead of "this user visited the BMW and McLaren websites 20 hours ago").

This week, Google also officially announced a new privacy-friendly API as part of its plan for a better advertising ecosystem.

It is called Trust Token API, and it is a new browser technology that comes to deal with possible problems that will occur after the end of third party cookie support.

The new Trust Token API will create unique cryptographic signed badges for each user that advertisers will not be able to use for tracking. But webmasters will still have access so they can determine if a user is a bot or a real person.

This API is still in development, and Google posted an introduction to the new technology on its Web.dev blog last month.