Deliveries of the Starlink internet service have started throughout Greece, except for the islands of the eastern Aegean. You can order today. 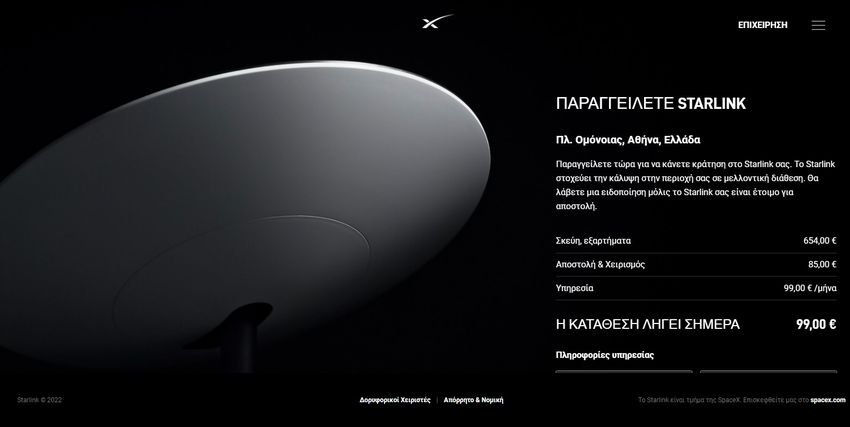 After a long wait, the JMC was finally signed for the regulatory framework of the standard antennas of the company Starlink and the company is now active in Greece as well. The subsidiary of Space X and tycoon Elon Musk, provides Internet access through a network of small low-orbit satellites (Low Earth Orbit-LEO).

The signed JMC considers that the satellite internet will function like the model of satellite TV, ie each subscriber will not need to apply separately for the licensing of his own equipment. So all you have to do if you want to connect to the internet via satellite, is to order the appropriate equipment from Starlink and install it.

Cost - Comparison of wireless networks
The cost of both service and equipment is high, at least for the pockets of home consumers. The equipment costs 654,00 euros, and shipping from the United States to Greece amounts to 85,00. From there on you will be charged with the monthly subscription of 99,00 euros per month.

If you have pre-ordered, you are obviously waiting for the company to notify you of the next procedure. For commercial use, this price is considered reasonable in relation to the prices that currently exist for wireless internet (wisp).

There are areas even in Athens-Piraeus, where the internet connection is really disruptive. If you have a company and your connection needs are high, in some cases you will not get more than 5 Mbps cable. Of course, you do not set up e-shopping in such conditions.

A 10/10 Mbps WISP connection in Athens, at best, would cost you 160,00 per month, with free equipment rental. And with all the problems you may have, since the WISP connection requires constant visual contact.

The alternative for satellite internet (not Starlink) as it has been so far in Greece requires unrealistic prices and is completely unprofitable. Cable connection remains by far the most economical, but as we said before it is not possible everywhere or it does not have the right quality. As for the optical fiber, it is still in the excavations!

Driver Tesla Model S was caught sleeping at the wheel

What is Starlink?
Starlink provides satellite internet in Greece. The SpaceX system consists of thousands of small low-orbit satellites, combined with ground-based transceivers that promise high-speed, low-latency internet, anywhere in the country.

The company has already launched 1.500 satellites and according to its schedule intends to reach a total of 12.000 in the coming years. Its customers can expect to see download speeds between 50 Mb / s and 250 Mb / s with a delay of less than 20ms.

How to destroy a motherboard