Windows 10 has been around for a few years now, but it's very fragmented in different versions, and sometimes it's not all the same.

Because h Microsoft is always planning the next major release of Windows 10, offering beta versions (also known as Insider Previews) for those who want to try them out.

On the other hand, businesses using Windows 10 need stability and are not interested in regular feature updates. Thus, the company provides several branches (publisher branches) to be all happy.

Insiders versions are the first to test public versions, and are released with every new version of Windows 10.

When an important version, like the Creators Update, is released to the public, Insiders have already used it for months. This symbiotic system allows Windows Geeks to test new features before anyone else and to help Microsoft with feedbacks on new releases.

Microsoft offers many different "rings" that correspond to different levels of stability. The following is a diagram of a recent Windows Insider event where the rings on the left are less stable: 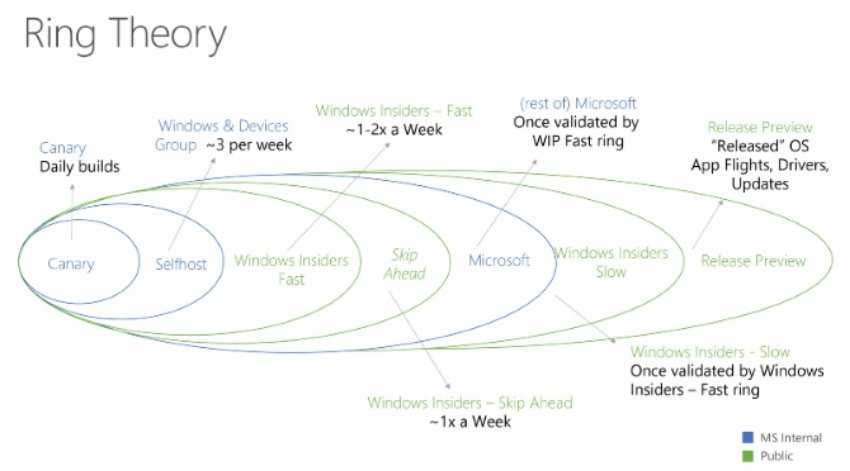 The description of the process is not so detailed in this article. For example, the Canary build you see in the layout only applies to Microsoft developers and we will not mention it. However, it is worth mentioning the important public Rings:

Fast or Fast: This is the most advanced ring Insiders can have. As soon as Microsoft's internal testing approves a new version, fast ring users can get the update. So they get access to new features earlier, but this build is very likely to cause problems.

Slow or Slow: As soon as users from the fast ring try a build, it moves to the Slow Ring. To get to this point some build, some of the biggest problems have been resolved. This is the default download mode if you simply register with Insider. It enables you to try new features before public release without much risk.

Release Preview or Release Preview: The most stable Insider ring is not actually a growth channel. Windows on this channel is no longer developed by developers, but if they need something they get quicker little updates that lead to the stable version of Windows 10. Sometimes a month, Microsoft releases general fixes for bug fixes, and to improve security. These updates will all be received, but those in the Release Preview will get them earlier.

Skip Ahead: Microsoft has recently given the Skip Ahead option for Insiders on the fast ring. If you choose it, you can stop trying the current version of Windows and moving on to the next version. Windows Insiders are currently testing the Fall Creators Update. Those who have chosen Skip Ahead will soon get builds of the next big version, meaning they will get a system full of bugs.

The Insider program is completely optional and you should probably avoid it.

Insider rings focus on exciting new developments, but the Long Term Servicing Branch prioritises stability. As you may know, Windows 10 has several branches that control how their updates are available. Three main sectors are available to regular users:

Current Branch: The usual, stable version of Windows 10. Computers in the Current Branch receive operating updates (such as the Creators Update) after Microsoft testing and its official release to the public. Most are in this industry.
Current Branch for Business: If you run Windows 10 Pro, you can choose to postpone upgrades. You will continue to receive security updates, but you will not have updates that add new features several months from when others receive it. It is a more conservative option that allows you to make sure that the problems of a big update do not affect your computer.
Insider Preview: As mentioned above, your participation in the Windows 10 Insider Program allows you to download and test important updates before reaching the Current Branch. These beta versions may contain errors.

There is also a fourth Branch, which is called Long Term Customer Service or LTSB by Long Term Servicing Branch. Domestic users can have the three above branches (Windows 10 Pro to postpone updates) only by adjusting some settings. LTSB is only available for Windows 10 Enterprise.

So what exactly does LTSB do?; As the name implies, it is a branch that is even slower than the three above. Microsoft offers it for computers that need stability more than new features.

For example, an enterprise that has a computer that controls sensitive hardware is not interested if Microsoft Edge supports extensions. The business needs a computer that runs an extremely stable version of Windows, which is not going to be automatically upgraded and spoiling productivity.

LTSB does not include the new Windows 10 features, such as Edge and Store apps, but still receives security updates to keep the system safe. Function updates, such as the Fall Creators Update, will not reach the LTSB. Microsoft plans to release a new version of the LTSB every two to three years, and each version will be backed up for 10 years.

If the above was not enough, Microsoft also has many different Windows Update tools. These allow IT to control exactly how business computers receive daily Windows updates. In a business environment, this can be complicated but rather fast. Let's look at the available options.

As mentioned above, you just have to check a box in the Windows Update settings panel and important updates will not be available on your computer for a few months. This helps businesses avoid the problems that arise with each new version of Windows 10.

Microsoft also offers Windows Update for Business. This extended tool allows IT to use Group Policy to customize update settings on multiple computers at once. Instead of a binary control framework, a company can postpone important updates for a whole year.

Both of the above options are relatively simple and come for small businesses. For a larger scale, Windows Server Update Services provides even more control. It is part of the Windows Server (OS) operating system for companies that need a centrally managed server. In addition to postponing, it allows a company to add an approval layer for important updates. The company can apply the new updates first to a specific computer group before allocating them to the entire company.

The even more powerful option is System Center Configuration Manager. It provides IT with even greater control over updates, with details of deployment options, installation timeout, and bandwidth to be used.

If you are not responsible for managing Windows 10 in a business environment, these options are quite confusing. As a home user, just wait for Windows to notify you about the latest update. In a corporate environment, things are more complex.

What do you understand?

With the above explanations, it is clear that there are no versions of Windows 10 that are all running. Operational friends could try out a preview from the Insiders channel while a business runs the Long Term Branch.

Meanwhile, two different companies can have two completely different Window 10 structures based on how they receive updates.

But when you think of the Microsoft system as described from the beginning, to the end, everything seems to favor Business.
It is worth noting that not every Windows 10 Enterprise is available for free, but there are still ways to install Windows 10 on your computer for free. Yes and do not think that Microsoft has made a mistake…

The above system offers Microsoft testers free of charge to provide trusted versions to those who pay reliability. All the rest will do well not to complain if your system is a free Microsoft grant.

Kaspersky: Is it finally a tracking tool?